Hopefully, I'm back to a full and reasonable level of productivity when it comes to writing reviews now, and what better way to demonstrate this than to get around to reviewing one of the albums by one of the several bands who have asked me to review their material. This evening I'm reviwing Spain's Fathomhell, a black metal outfit, and their début EP, Non Pietatem Erit. 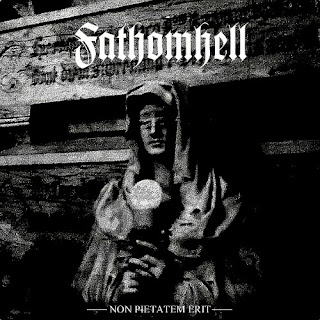 With two of the tracks being only around a minute a piece, the EP isn't quite as long as I thought it was going to be, going by the number of tracks. Nonetheless, Non Pietatem Erit does manage, and proudly, at that, to give the listener a good taste of what the band do, and it's immediately quite plain that Fathomhell are a no-nonsense black-metal band; tremolos, pounding drum-beats and more than a hint of cold, frostbitten majesty seep through, captured just as well in the warmth of Spain as in the cold of some northern European winter - it just goes to show that it where you come from doesn't have to have any influence on the kind of music you make. In terms of style, Fathomhell certainly go in for the well-trodden traditions in their black-metal path; tremolos, blasting, and the usual accoutrements - instead of sounding derivative or boring, however, these most traditional of techniques are well deployed by the band, to create a very respectable collection of tracks, demonstrating perhaps, that the first way of doing something, in this case the traditional black-metal sound, can often be the best way of doing it. As far as black-metal production styles go, Fathomhell sit somewhere in the middle; on the fence between rough and clean - certainly, everything is quite politely, tidily produced, but below the crisp guitar sound and rigid drums, there still rests the all important crackle and fuzz, the sonic rasp which gives black metal it's dark, unforgiving character.

One of the things which stands out somewhat in the EP is the effective use of solos; sure, black metal, like any other metal genre, has its fair share, but in Non Pietatem Erit, there are plenty to go around, and not simply tremolo based, either; there are solos which genuinely do a good job of decorating the songs, and indeed capturing a dark, bleak atmosphere which, I think it's safe to say, some bands really miss the mark on, and layer the hacking, dark edge with something a little bit too merry or conventional. Fathomhell, on the other hand, have solos, for instance the one in "Illusions of Death" which really carry on the scary, jarring feel of the music, instead of feeling a little bit out of place. You really get the impression that the band go about composition and song-writing in a sensible and well-measured way. Perhaps an even greater indication of it is just how well the programmed drums are done is that they sound exceptionally appropriate and natural, to the point that I assumed that the drums were real for the first couple of listens to the EP. You can really appreciate the care to which the band have gone to ensure that the recordings are of an EP standard, and not merely a demo of some persuasion, which leads me on to another really plus of the record; its tangible air of proffessionalism - it sounds, from the very first few seconds, right up to the moment it ends, a very professional, proper, work - many black-metal bands carry with them a slight feeling of amateurism, which this band have managed to avoid; the craftsmanship is very much top notch.


There can be two instances of the same thing, with different levels of quality; well made hammers are the same thing as poorly made ones, for instance, but they are separated by quality. If you follow my analogy, what I'm trying to explain is that while the band haven't crafted something new or ground-breaking in terms of style, they have made a very solid instance of an already established something. Ultimately, this is a conventional black-metal album, but one which is crafted very well.