Believe it or not, I've not listened to Decide very much at all, and despite them being one of the obvious death-metal choices in terms of bands to explore when on the cusp of the genre, I somehow managed to miss them while I was discovering death-metal in the first place. As I always say, glaring omissions in my listening experience are best fixed promptly and thoroughly, so today, I've given the band's second record; Legion, a spin or two. 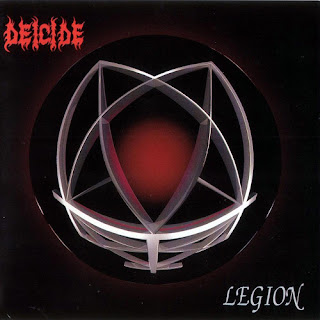 Legion is very much an example of what I prefer death-metal to sound like; that is, thrash which has been to the gym. Thrashy death metal tends to press the right buttons for me, especially in terms of the riffs, which nine times out of ten, I'll remember better than an equivalent death-metal band in which the guitar-work is overly brutal or technical. That's not to say that Deicide aren't a bit of both, but at the same time, they don't take either attribute to an over the top level. Compositionally, the tracks on Legion certainly pack quite a punch, with very nimble playing, darting back and forth between sections. At the same time, however, this manic energy comes across as a very natural, and not in the slightest forced. The drums, particularly, are delightfully tight and produced in such a way as to really capture the essence of the thunderous, at times unrelenting double kick, which goes through dozens of tempo-changes without shedding any of it's energy. Vocally, Legion also represents Deicide at its most energetic, with Glen Benton's varied and rapid-fire vocals being razor sharp and especially crazed-sounding, which is the persuasion which suits death metal the best. The vocals certainly fit very neatly into the atmosphere which the music propagates, creating something with that old-school dry sound, but also a depth and thickness above and beyond the norm, with the vocals riding at just the right level. Even the generally more-neglected instruments in terms of production are very well catered for in the mix, with a very audible bass, for the most part.

After a few minutes, it's definitely apparent that Deicide are a lot less primitive than the death-metal I typically listen to; there are certainly no d-beats on parade here, instead, the song structure is very angular, in the traditional early-nineties manner. Generally, I find such bands a little more challenging to listen to, but there's no doubt that on Legion, the tight, square approach to death metal is executed in it's finest form; proving that there isn't a single style of metal I won't enjoy provided it's well-made. Albums like Legion represent the very bespoke end of the death-metal quality spectrum, and as an album, it certainly lends itself more to my enjoyment than most of the USA's death metal bands did when I first encountered them - either a sign of quality, or a sign that I'm starting to know the intricacies of death metal which I enjoy most. In this scenario, most likely both. There's certainly a notable shortage of detractors from the record, and nobody seems to hold the view that Legion isn't a very solid record indeed, most probably a pinnacle in an up-and-down discography. The machine-gun approach to the music; that is it's sheer speed and limited duration really emphasise the extremity of the genre in ways which some albums fail to; The opening track, "Satan Spawn, the Caco-Demon" for instance, feels like some sort of lesson in intensity and blasphemy, and must have been even more noteworthy at the time, before a thousand other bands had pushed the envelope of risqué and down right alarming to a whole new level. Perhaps the ultimate statement of this review is going to be that the record feels like a prime specimen of its class; and in a way which can't quite describes, really exudes how exciting death metal can be.


Once again, it's been pleasant to set a few hours aside today for some horizon-broadening exercises, and certainly made more rewarding by the realisation that Deicide, and Legion in particular, was well worth bothering to listen to. One of the great things about writing reviews is that I manage to get myself to listen to new and interesting things, which otherwise I may not have, and once again, it has proven worthwhile.