Amorphis are one of those bands who have radically diverged, musically speaking, from where they initially stood, but have a highly praised status among many metal fans, those who enjoy them for their old material, new material, or indeed, both. I haven't listened to any of the band's newer material yet, although I can guarantee that I will, so in the meantime, this review is going to examine the bands full length début; The Karelian Isthmus. 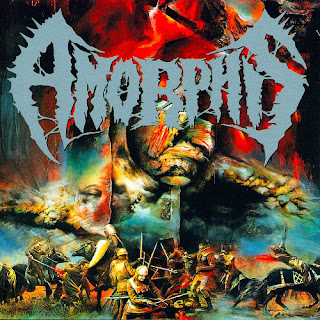 Released in 1992, The Karelian Isthmus is pretty damn old-school both in terms of it's literal age, and it's composition; heavy but soaring death metal, aged in oak casks for 21 years. However, the touch of the unique almost immediately radiates from the record, and while this would be more and more present in the bands career, even at this formative stage, you can listen to the album and hear a certain freshness to the record which might not have radiated in quite the same way from the bands contemporaries in the genre. Certainly, at that point in death metal's development, there wasn't a very high prevalence of "the same old shit", with many bands playing a single style to death, but even by the luxuriously creative standards of that time, Amorphis come across as more inventive and even ingenious than most. The riffs, perhaps the part of death metal I most live for, are splendid and various. Thoroughly gritty, fast paced rampages are coupled with, perhaps more prevalently, grooving, undulating sections. It is the latter of these which often really grab the you by the balls and throws you around, reinforced further perhaps by their contrast with the hasty guitar work in the faster sections. The closest comparable style which immediately comes to mind is the similar mature mid-tempo work of Bolt Thrower, who had started doing the same sort of thing at roughly the same time, in their third record Warmaster. Like Bolt Thrower, many of the tracks on The Karelian Isthmus carry a massive amount of power, but without having to call upon extremes of tempo; the rumbling, crushing riffs swagger and take a moment to look you in the eye - a massive force which doesn't feel the need to hurry; it does it's job at its own pace.

The factor which really sets the album apart, on top of spellbinding song-writing, is the huge injection of atmosphere which Amorphis give death metal as a genre; throughout the album are intricately laid sections of atmosphere, often born from the cleverly placed lead guitar work, sporadic synth use, and from the guitar tone itself. Even the rhythm tone is surprisingly versatile, creating stomping riffs one second, but then suddenly evoking a far more epic air, without skipping a beat. The result is an album which feels genuinely vast and windswept, with a depth and texture which few death metal bands strive for, let alone possess. The record demonstrates too, with one fell swoop, that you can make an extremely impressive and innovative album without undue self-indulgence; the musicianship is fantastically tight and on-the-dot, with technical elements thrown in with plenty of forethought for what they will bring to the song, as opposed to gratuitously. In this respect, a less is more approach really sweetens the album, bring the riffs out really pleasently, and helping emphasise the notes and chords, as opposed to shouting "look at me, I'm playing very fast" - a trap which too many bands fall into: Not Amorphis however. The drums are also a solid example of this, with sturdy, down-to-earth drum work sounding amazing both from a compositional standpoint, and in terms of production, where they really do sit right in the middle of the percussive Goldilocks zone, without any undue fucking about. The drums certainly really caught my attention, and helped to draw it to the flow of the record as a whole, whilst giving it a backbone, performing the task which drums are always given with great talent indeed.


The last few months for me have marked an increase in my efforts to discover bands I haven't experienced before. Amorphis, for the last few weeks, have proven to be one of my favourites, and having enjoyed "Tales From the Thousand Lakes" extensively, it's fantastic to discover that the previous album - in other words, this one that I'm reviewing - is every bit as good, and I thoroughly recommend Amorphis if you haven't given them a try before.