Last week, I experienced a Deicide album for the first time. But an even more grievous omission lies ahead of me; Saying that you've never listened to what is purportedly one of the best death metal albums ever made is a bit like saying you've been missing out on oxygen; purportedly one of the best gasses for breathing. And so, without further ado, I feel that it is vitally important to spend some time today familiarising myself with the mighty, nay, monolithic creation that is Entombed's début, Left Hand Path. Destiny awaits. 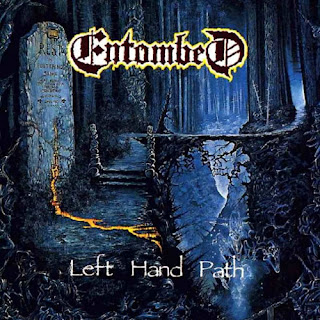 It's fairly immediately plain that Entombed are rightfully the figureheads of old-school death metal; I was genuinely excited to put this album on, such was the hype and general solid-gold praise which accompanies it, and it quite quickly becomes evident that Left Hand Path is an album which does a very good job of living up to the hype which it has built over the last two decades. The album seems to pack a tasty serving of everything you could possibly want in a death metal record; grimy, surging riffs loaded to the brim with energy immediately burst into life, with a near perfect gritty production which allows the fierce riffing to ooze and ruggedly crunch its way out of your speakers, with that now-famous "Entombed-tome" saturating it with heaviness and energy. This is without a doubt a death metal record which really makes your body and mind feel primed for primal fist-pumping and throwing yourself around, nodding your head all the while. The drums are particularly tastefully captured, with a one heck of a punch conveyed on the record, without sounding over-the-top in terms of processing. The vocals, too, sound great; a proper, scathing, ass-kicking onslaught of harsh vocals in the traditional early death-metal style, which, of course, Entombed have done no small part in the carving thereof. The whole album really has a tangible solidity and mighty air - the sort of album which doesn't let you ignore how well written and delicious the riffs, and indeed atmospheric elements, are. I mention atmosphere because Left Hand Path is definitely not a sterile record; the tone of the record really spins an atmospheric web of deathly, ghastly feeling, perhaps that of some esoteric monolith, foreboding before you, many fathoms deep in hell.

Not being very literate in the magical ways of rhythm guitar, I can't really put into words what is so damn good about the riffs Left Hand Path contains; in brief however, imagine the song on any given album which has that riff, or that song. The one you've listened to six times before the second time you listen to the whole album twice. Left Hand Path is an album made of those songs; master crafted in forges with most death metal bands could only dream of. The sheer variety of styles engaged in definitely elevates the album to the position of the best damn musical fruit salad you've ever clapped eyes on; everything from crushing, doomy sections which curdle the blood and crush the bones, punk sections through which you appreciatively sip your beer, and downright thrashy sections which propel you across the room and through a brick wall, Tom and Jerry style; all of these styles and more colliding to create something truly well-seasoned and dynamic - nothing I have listened to before compares in terms of being a sheer case-study in good death-metal song-writing. It's the sort of album which ends leaving you with a feeling of "well... that's that. Death metal is finished... Entombed just did it all". Left Hand Path is, ultimately, a  death metal record which really masterfully exhibits a veritable ton of the features which I enjoy about death metal, and which typify the genre in general... and that's just the first track.


As I'm sure you can tell by my warm, pleased tone and ridiculous grin, you can probably tell that I'm not in the least bit disappointed. Left Hand Path is, immediately, and without much doubt entered into my top ten death-metal albums, and with damn good reason; from the beginning to the end, the record carries itself and presents itself as one of the best of the best, and the reputation which it has is backed up thoroughly by every chord, drum beat and vocal. Fantastic stuff.

This is a 10/10. My evening is better for having finally listened to Entombed.