When it comes to the NWOBHM, there are two ways in which to go about it; you can listen to Iron Maiden, or you can do it properly. A great stepping stone on my journey towards doing it properly is Tank - perhaps among the unsung heroes of the movement - both mighty songwriters and innovators, writing material which can safely be described like their namesake - amongst the heavy armour of the NWOBHM movement. One of my favourite salvoes from this heavy artillery is the bands fourth album; Honour and Blood. 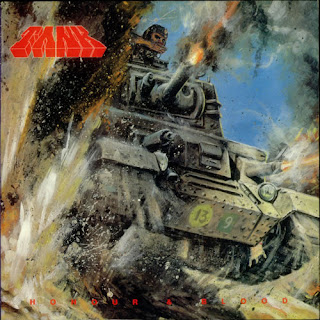 The thing I love about Tank, and this record particularly, is the rough-edged, no-nonsense edge which the band have. Granted, it's not quite as against the grain as Venom, but nonetheless, Tank have the kind of grit which I tend to love wherever and whenever I encounter it. Honour and Blood is perhaps one of the albums which best illustrates this, perhaps exemplified by the course, barking but very melodic vocal approach on the more aggressive tracks like "The War Drags Ever On" and the title track "Honour and Blood", both of which are exceptionally catchy, and together are the songs which I discovered the band through. This vocal approach is more pronounced than it was on the bands earlier albums, and really gives the record an interesting, gruff character; it's safe to say perhaps, that coupled with the name, the roaring vocal approach further conjoins the bands stylistic and musical themes, that of course being warfare, at least predominantly. It's important to note that Tank aren't a "concept band" with regards to theme, and Honour and Blood has it's fair share of themes; War, of course, but also more personal issues, which come through in the softer songs on the record. The playing style in places, and the approach of encompassing both aggressive tracks and ballads very seamlessly, but less frequently mixing the two elements within one song itself, is reminiscent of bands like Diamond Head, who had their peak somewhat earlier in the NWOBHM, and influenced many of the bands who would follow, including Tank, who seem to have inherited the fantastic riffs and well-written ballads which really make use of the residual rock n' roll which was certainly still running in the veins of metal at the time.

Also like Diamond Head, Tank are very proficient at making use of empty space in their riffs; realising, perhaps crucially, that the guitars don't have to be making sound all of the time. While so many bands were changing notes and chords, Tank seem to have realised that you can get just as much of an effect from going from a chord to nothing at all. Tracks like "When All Hell Freezes Over" certainly show this in action. Meanwhile, along with the rhythm guitar, there is some fantastic melody in the mixture, delivered by the lead guitar; When you hear the intro to the title-track, for instance, you instantly know that it's going to be a good one; it's rough and tough, but at the same time, it sounds thoroughly beautiful and elating - even epic, at times. Along with the solos, the lead sections in general do a fantastic job of giving the album some real rock 'n roll swagger - the band solo like they mean it; no pretentiousness, simply great lead-guitar work packed with feeling, the way solos should be done. Honour and Blood is, in general, an album which practically breathes rock 'n roll, in terms of song-writing, tone and especially variety, which the album has plenty of everything from the rocking, bluesy, solo-laden slabs of slightly cheesy 80's material, right through to far more underground, angry sounding and atmospheric material which really foreshadows some of the fantastic things which speed-metal were beginning to conjure in the early-to-mid decade. This variety is all the more tasteful for the fact that it seems to be compatable, all working together to illustrate that the NWOBHM was a true golden age; not only was every concievable style welcome into the mixture, but it all somehow worked, too. Without a doubt, Honour and Blood works fantastically.


At the end of the day, Tank are a fantastic emblem of the fact that the best known bands don't always equate to being the best. Perhaps a little less known than some of the names in the NWOBHM, Tank nonetheless bring superb material to the table in spades, and you can hear it oozing from every track on this record - Honour and Blood is a very rewarding and memorable listen, and I thoroughly recommend it to anyone who hasn't heard it before coming here.