The wind sweeps back my hair, as my mysterious, time-travelling, and oddly unquestioned open-top convertible filled with hookers and cocaine rushes along a evening-lit desert highway in the early 80s. I espy a legendary fast-food business; the great heavy-metal drive-through. As the raucous car pulls up to the ordering window, the usual crackly, intercom voice addresses me; "What will you be ordering today?". "Well, I say, you know the number-666?". "Oh, the Iron Maiden?" the voice replies. "Yes", I say... "I was just wondering if you had something a bit like it, but with extra cheese?" "I think we can do that, sir". The engine purrs as I drive round to be served, receiving a small package; nestled amongst the fries is the new White Wizzard album. 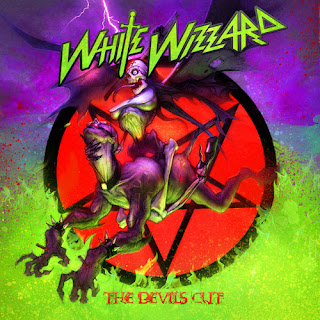 ...It's quite tasty too. White Wizzard might be a bit infamous for instability, but their new record "The Devil's Cut" does a good job of demonstrating that Jon Leon still has what it takes; that is, good ideas for catchy traditional metal, which whoever is currently under his aegis can deliver with gusto. Sure, it still sounds very, very Iron Maiden - something which the opening track certainly hammers home; nodding it's head to the trademark 'Maiden riffing style. Of course, what you've got to remember is that the band never claimed to be a fresh, avant-garde affair - no, their statement of intent was to bring old-school metal back to the ears of people who love it. Now that they don't have that guy who wore a Trivium shirt any more, they can do it without a slight dusting of irony, too. Either way, I digress from the true aim of this review, that is, to review The Devil's Cut, as opposed to waving some kind of metal-purist agenda around. From the off, I can safely say that this record has been the most enjoyable musically that I've heard from the band, and it really shows the band's character; Wyatt "self styled nickname" Anderson may have been seen by some fans as the trademark vocalist of the act, but the band's current vocalist delivers a splendid show, virtuosic, but at the same time gritty and gnarly to a nice extent - an interesting blend of Dio and Halford as far as influences go, but with a sufficiently different feel to both, so as to make him interesting. Gritty, in fact, is one of the things which White Wizzard always needed a little more of, and on this record, it's finally tangible enough; everything from the guitar tone to the drum-production has a little more roughness than it used to, and that is a very welcome addition.

For the first time in a long while, too, the record sounds like it was made by a whole band; granted, this is probably because the previous record literally wasn't, but nonetheless, the musicianship, tightness and complexity of the record is a monumental step up from Flying Tigers in terms of sheer fluidity - there is about twice as much lead work, and everything really exudes the feeling of a well oiled machine. This could well be the first album the band have released which really feels down to earth and wholesome - indeed, it sounds like there's a degree of synergy in this line-up that perhaps the previous ones did not have. Indeed, one of the most pronounced aspects of the music on this one is just how fun it is - this album is probably the catchiest new album I've heard in a few months, and sure, I've been picking up a few records which were released at the time which this record wants to sound like it's from, which feel a bit more earnest, but this one is pretty solid as it goes, especially these days. Sure, the band sometimes feel a little more contrived stylistically than some of the traditional bands who play nowadays, but at the same time, White Wizzard do a great job of creating the soundtrack for swaggering, whiskey fuelled antics. Swaggering really being the correct word, as I think it's safe to say that the thing White Wizzard really do make their own in terms of musical output is the rocking, bluesy elements, something which is so liable to be completely ostracised from typical metal playing, but find a really welcome place within the band's sound, suiting what they try to convey perfectly. This time around, I think I'm going to step out and say that said output is the best yet.


And so there we go, as it turns out, I'm rather impressed by this record, and genuinely happy for the band; this time, they've hit the nail on the head, struck the balance right, and put some top-notch effort into the song writing process. For all my doubts, now that I've listened a few times, I can safely say it has paid off. Even if you've already written off the band's previous work, as some may have, this one is worth a try. I think I like White Wizzard again.