Evile are often one of the first thrash-revival bands the aspiring metalhead is likely to encounter, although many, admittedly including myself, have sometimes pondered the reasons for this; how did Evile become such a monolithic name among many of their peers? For the moment, I'm merely going to pass upon this question, and instead do what I'm supposed to be doing today; reviewing their fourth and latest album; Skull. 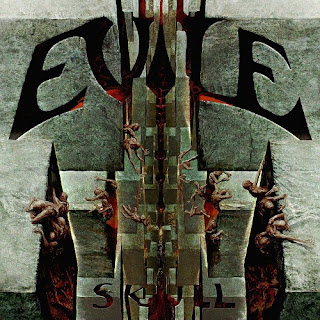 There are a few things I enjoy about Evile above and beyond their music: First off, their consistency, particularly with regards to artwork and stylistic choices; all of the bands albums feel pleasingly together, as if they were plausibly in the same set - something which was always very charming and enjoyable to behold in thrash records the first time around. If you line-up the first five Slayer albums, for instance, they real feel like they belong together. Evile manage to hold this feeling of solidity, which many of their peers don't quite achieve. Secondly, in an age where Metallica are almost certainly well past it as far as good song-writing is concerned - indeed, about twenty years past it - Evile are a fantastic substitute; listening to any Evile album, including, perhaps even especially Skull manages to capture the energy and chunky, riff driven approach that Metallica took, and bottle it up for the younger generations, myself included, who never had the opportunity to buy a Metallica album the day it came out and actually discover it to be good. That's not to say, however, that Evile's sound just a clone. At one time, it was perhaps derivative -  a complaint levelled at them fairly often, but not a complaint which I hold myself; especially with the last few albums. Evile has evolved into a more interesting creature. This album features the now familiar catchy, slightly groove-laden hooks, and melodic, memorable vocals, often built, like so much lego, into genuinely enjoyable choruses, which have their own character, feeling, gradually, less and less lifted from classic thrash; Skull is yet another culmination in the enjoyable journey of watching Evile aquire their own identity.

One of the places where the band slip back into full-blown Metallica mode comes in when they launch into a ballad, with eerily Hetfield vocals; nevertheless, the ballad track on this record - Tomb - sounds, at least musically, a bit removed from being purely derivative, and heck, even if the vocals do sound exactly like James Hetfield, at least they sound like a good James Hetfield. Indeed, it may be for the "wrong" reasons, but another of the factors I've enjoyed while listening to Skull, and Five Serpents Teeth before it, is that Evile are one of the few thrash-revival acts to flirt with the mainstream in any overt way - that is, with ballads and overt catchiness. The end result is that Evile are one of only a few bands playing the school of thrash with that sound, instead of being as fierce as possible, there's a certain laid-back feel in places. Reassuringly, the band also demonstrate that they don't have any plans to write a black album any time soon - instead they flirt with the mainstream without any evident intentions to actually fuck it. As always, the more aggressive, thousand-mile-an-hour chugging which we should be very much accustomed with by album four is of course, present as always; often subsiding into groove-sections, which range haphazardly from fun right through to insipid. When the band go full-throttle however, the sheer thrashing, neck-wrecking speed of the riffs are impressive indeed, akin to the sound you would get if someone gave Master of Puppets some new running shoes, and actually produced it well, for that matter.Likewise, the rumbling, percussive power of their riffs goes quite a way to excusing the relative lack of guitar melody; something which many thrash-revival acts have forgotten about.


Ultimately, no, this won't be my favourite album of the year, but I can safely say, once again; Evile have made a solid record, and one which is precisely the sort of record that fans will be after; sure, people who are only slightly invested in the band might call it boring or repetitive, but I can only imagine that for Evile fans, this is another tasty dose of what they enjoy about the band.