Sometimes, you discover bands in interesting ways; through friends, through going to live shows despite never having heard the bands playing before. The way in which I discovered Helheim, however, is a little bit less adventurous; every now and again, I go on Metal Archives and click the random band button a few dozen times until a band catches my eye. Fortunately, I didn't keep clicking, and instead decided to see how this particular band sounded. The conclusion I've reached is that I've stumbled upon one of the more underrated Norwegian black metal bands. 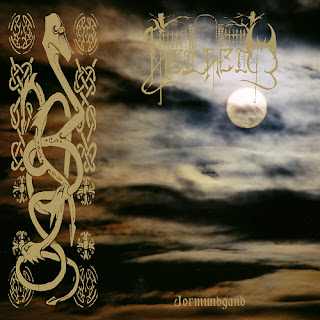 Jormundgand is the band's first full-length album, and the artwork very much caught my attention for the old-school air it exudes; that quintessential style of early-to-mid nineties black-metal, before the clichés were in place, and bands were still being inventive; sure, it's a photograph of the full moon, but it's done in it's own unique style, and as you look at it, it whispers to you, promising to be a great record, in the same way that records like Summoning's Minas Morgul, or Bathory's Under The Sign of the Black Mark - records in which the artwork speaks volumes about the music within. Musically, Jormundgand is an album which is like it's artwork; comfortably recognisable as old-school black metal, but with an enjoyable twist or two in the recipe. As the title track, which also opens the album, bursts into life, scathing, and extremely harsh rush of tremolo rush out to meet you. Blast-beats and absolutely insane vocals accompany them; as if someone took conventional black metal vocals, and then added an extra level of passion and energy to them. The resulting shrieks are initially jarring, but slowly it dawns on you that they really fit with the atmosphere which many of the songs are aiming at; the frostbitten, harsh wind howling around the edges of homes, biting into the flesh and clothes of those unlucky enough to brave the blizzard. The samples of thunder which sporadically appear in the opening track certainly reinforce this image, and along with the aesthetic of the artwork, really sets the stormy, brooding and malign tone which the record holds, and unifying it pleasantly - the album absolutely feels like a complete package, which makes it much more rewarding to listen to.

Of course, one of the most noticible features to the record, and indeed, the band in general, is the Viking metal edge which bedecks most of the songs; even the most scathing and ferocious tracks wear a cloak of Nordic elegance and atmosphere, made manifest in clean vocals and tremolos which are more grandiose and soaring than the rest. Indeed, there are tracks such as Didr Ok Dordr Liggr Helvegr which trade out many of the black metal elements in exchange for northern female vocal melodies. Indeed, whilst subtle, almost every riff on the record feels slightly more Viking than most black-metal riffs out there, and while diabolical and dark, the record is also steeped with majesty; the thick guitar-work carries the majesty of falling snow and more than a touch of the poetic mystique of Norse mythology. Jormundgand, for the most part, is one of those records which doesn't leave many gaps between the riffs, instead opting for the wall of noise approach, although, fortunately, not creating something over-saturated with noise; there's plenty of synth to keep the sound stimulating, and the record still has plenty of dynamic structuring to boast; none of the songs drag, and as a whole, the album really flies past very smoothly and enjoyable; despite being chiefly composed of "long" songs of the over-eight-minute range; ultimately, the song-writing skill of the band has resulted in a greatly enjoyable record - one in which each track earns its length.


When I decide what to review on here, I often aim to focus on the underrated bands within any given genre, and this is a prime example. Helheim aren't a band whose name I've heard being passed around any of my peers who are into black-metal, but frankly, it should be. The band don't seem to have the widespread recognition they deserve, and with albums of this quality level, their material should be up there with that of their better known contemporaries. This record is an absolute gem.