All good things come to an end, and Cathedral were a very good thing indeed; a pillar of doom and bastion of all things riff-laden and slightly bizarre. It's always sad when a great band cease to be, but much like life itself, it's far more enjoyable to appreciate what has been done, than has not. In this instance, ten studio albums will always stand for out appreciation - the final of which, this year's "The Last Spire" is the subject of this review. It can, pleasingly, be said to be a fitting end to the band's run. 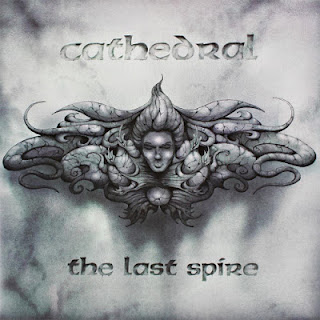 For the purposes of fairness, I suppose I'd better expand on my point however. What does the record do to be a fitting end to the band's career? For a start, if anyone needed to be filled with reassurance, the artwork fits utterly with the unmistakable and iconic style which every album the band created is bedecked. More importantly, and sonically, however, the record has a genuinely triumphant feel; the music is fresh and still energetic; the band are, very overtly, as solid and lively on this record as they were twenty two years ago when they released Forest of Equilibrium. The Last Spire lives up to the bands potential, and, for my money, is just as solid as any Cathedral album which has come before it. It's pleasing that the band manage to do so; many a band can be noted to be releasing sub-par material by the time album number ten rolls by, but not Cathedral - the doom on this record, and it is doom, as opposed to the bands recent forays into stoner metal and downright psychedelic lunacy, is as good as ever. In fact, The Last Spire feels like a very deliberate shot at recreating the classic doom sound of Forest of Equilibrium and The Ethereal Mirror, whilst sounding fresh and non-derivative at the same time; ultimately, it would perhaps be unwise to pigeon-hole the record in terms of sound, other than, suffice to say, it being a Cathedral album, and one with all of the familiar trimmings; the unique vocals of Lee Dorrian are as good as they ever were, and the general tone of the record gives it a timeless Cathedral sound; it's good to reflect on the fact that the album probably won't become dated. Generally, none of the band's releases will.

Unlike the previous album, or rather, double album, The Guessing Game - a truly a narcotic voyage through absurdity, in the best possible way, The Last Spire instead goes down the road of straight-forward, crushing waves of guitar, or, as straight-forward as Cathedral ever can be; eccentric, atmospheric and at times psychedelic are still very much words which spring to mind when describing the record's sound, but it's certainly stripped back from the previous album, and a damn-sight more gloomy at that; where before rocking, catchy choruses dominated, instead this album has rough, destructive riffs, grinding together like giant millstones of doom and lament at the decadence of the world. The raucous cawing of crows and bring-out-your-dead chant of the intro track really sets the scene for most of the rest of the record. It's bleak, the way doom metal is best enjoyed; bleaker perhaps, than a lot of the band's material, which gives the listener the pleasure of exploring uncharted sonic territory. At the same time however, the album carries with it a hefty layer of the band's accustomed atmosphere, which gives it beauty and whimsy in equal parts; it would be lying indeed to say that the record is entirely one of darkness and despair - I'm not even sure that such a record is truly possible for Cathedral, and there are many a pocket of Dionysian whimsy and merriment amongst the dirges, perhaps the bands signature manoeuvre, and one which is executed superbly on this record. The production too, is very tasty, with course, sandpaper guitar-tones and very precise drums, albeit maintaining an organic feel - giving the impression of a very well tuned drum kit, and not of any post-recording silliness.

Sad as it is that Cathedral are active no more, I can easily conclude on a very positive note. Or rather, Cathedral conclude on a very positive note indeed; The Last Spire is solid, well crafted and contains more than enough delicious riffs. Ultimately, a very fitting farewell indeed - ending on a high note and really, we couldn't have asked for more.