There comes a time in every man's life where his internet connection is slightly too slow to face the idea of streaming anything; fortunately, the tides of telecommunication have turned, and unseen hands have, for their own devious reasons, given me a connection which works properly. Now, finally, I can get around to all the reviews bands have been requesting; Only four months or so after they asked me, I'm going to start by reviewing Alpthraum's latest album, Chronophage. Sorry for the delay, and thank Christ I'm a album-reviewer and not an emergency service. 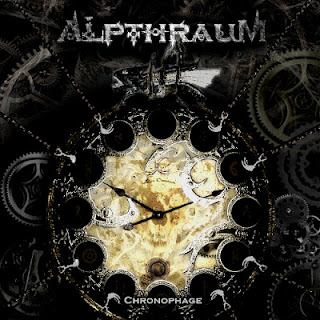 Chronophage feels like an almanac of modern progressive metal, and a vast number of the elements which typify the genre are present; for instance, the music is an absoloute amalgam of styles, which blend together into something not immediately recognisable as any of them in particular; the grayish-purple plasticene which all plasticine is destined to become. I don't have a problem with this, I must add; it's just very much the case that with modern metal like this, you can sort of hear a bit of every style of extreme metal in the mixture, but you certainly can't tell where one ends and the other begins. The music has the textbook modern, groove-laden riffs of bands like Strapping Young Lad. Indeed, a lot of vocals have a shot at the snarling but melodic style of Devin Townsend. On the other hand, the rich, shimmering synth work is reminiscent of Emperor's later material, and presumably that of Ihsahn after that, although I haven't explored his work. Overall, the styles merge into something which feels homogenous and compositionally solid; the songs are relatively short for being members of the "progressive" genre, which goes hand in hand with the fact that they're considerably more accessible and immediately enjoyable than a lot of the "progressive" material I'm subjected to, which tends to take the sound of a lot of musicians in a room, self-indulgently fucking about. Alpthraum, on the other hand, seem to be lending some sympathy to the listener by making material which feels less like showing off, and more like legitimate songwriting; more power to 'em, or rather, as the band is chiefly the brainchild of one man, more power to him.

Sometimes synth is subtle. Chronophage has the sort of synth which possesses all the subtlety of a flaming man running down the street. I get the feeling, however, that that's sort of the point; there are two major driving forces in the record; one is the chugging guitar work, and the other is the synth, which is certainly designed to lead, and not merely to embellish. Usually, when synth is very out-front, I find it off-putting, but it's executed very tastefully on Chronophage, and it's rewarding, dare I say very fun to get lost in the swirling, thick and modern synth melodies. The guitar, too, is fun - complicated enough to keep your brain fresh as it pursues the riff, but not so technical or downright weird as to cause serious injury. The riffs are another instance of where the band really manages to achieve a sensible balance; there are enough of those percussive, single-note chugging riffs to give the album a bit of that certain je ne sais quoi which only chugging-riffs can provide, but at the same time doesn't have so many of them to be tedious or just plain silly; a rhythm guitarist should seldom have only the picking hand near the guitar for more than a few seconds, and for the most part, Chronophage obeys this rule, and granted, while the album doesn't do anything truly progressive in the sense of bringing anything new to the the table, it has vastly exceeded my expectations in succeding to being together, and with impressive skill, many of the elements of modern metal which don't annoy me, which doubly rewards me by providing a record I actually enjoyed listening to thoroughly, and spared me the task of being a bastard when it came to reviewing it.

It took me a while to get around to, but I'm glad I listened to this record. While it definitely isn't the sort of metal that I listen to every day, it was greatly more pleasing than I had even begun to anticipate, and I'd recommend the record strongly to anyone who really enjoys this kind of thing; tracks like "Box of Illusions" have been among the biggest signposts towards me accepting modern progressive-metal yet.

This is a 6/10; it would be unfair for me to give something which isn't quite what I'm usually into a really high score, but even a nonbeliever like me can appreciate how solid it is.