#281 Wall of the Eyeless - Wimfolsfessta

At the moment I'm putting a bit of effort into working through the reviews I've been asked to do in the last few months, but didn't immediately get around to. Wall of the Eyeless, who play an interesting mixture of progressive extreme metal, leaning plentifully towards death metal, are another band who asked me to write my thoughts about their material, and today, I decided to take a listen to their newest demo; this year's "Wimfolsfessta". 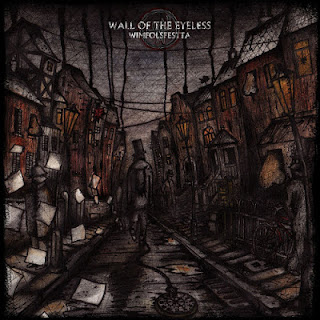 Whilst managing to sound a bit different to any single band I've heard before, it's immediately plain to see that Wall of the Eyeless draw on an interesting range of influences in their work; progressive flavours of both black and death metal are present; with the duel clean and harsh vocals done in the style of both recent Enslaved, and Opeth, perhaps the "big bands" in the respective genres. The vocal approach is enjoyable, with clean choruses really helping the song uphold a feeling of grace, closure and completeness, and mixing harsh vocals with clean, melodic ones - well executed on this record - is something I tend to enjoy. It's always worth remembering that simply because metalcore does it badly doesn't mean that good metal like this can't do it well, and Wall of the Eyeless certainly manage that, with the clean sections sometimes really dominating and crowning the track, despite being more subtle than the harsh, Ackerfeldt style death-growls which make up a lot of the vocal department. Like a lot of intricate, progressive metal, the tracks on "Wimfolsfessta" have an initially eclectic and cryptic, perhaps to the untrained-ear (mine) chaotic, structure; certainly, it takes a reasonable number of listens to learn what's what, with regard to the music, but when you do, it's rewarding. Of course, even someone who doesn't actually know much about music theory can pick tell to an extent when a song is assembled with care and hard-work, and for the most part, this band seem to be as skilled at composition as they are at the actual playing of their instruments, which is refreshing indeed.

Another refreshing dimension of Wall of the Eyeless' brand of progressive metal is that it doesn't reek of pretentiousness - far from it, in fact - all four of the tracks on this demo feel like the parts which make them belong where they are; neither self-indulgent or gratuitously fancy, two aspects which tend to be  far too present within the "progressive" sphere. Instead, Wimfolsfessta sounds intricate and clever, but also natural and organic; something very much accentuated by the relatively rough, murky production of the demo; perhaps it's not quite as crystal clear as the band aspire their production to be in a best case scenario, but none the less, the cloudy production is very enjoyable to listen to, giving the record warmth, without excessively robbing it of clarity. All in all, I suppose my main point is that while still a demo, and relatively rough, the mixing and production of the demo's sound is an enjoyable one. Another effect of the relatively rough production is that it makes the blast-beat based, black-metal riffs feel comfortably at home in the recipe, instead of being sterile. It is, in fact, these black-metal sections which really boost Wall of the Eyeless into a position of being very interesting to listen to, and few of the similar bands I can bring to mind in quite the same way; Enslaved, for instance, of course use a lot of black-metal in their records, but it's not quite the same concoction that Wall of the Eyeless have created - similar, maybe, but there are certainly intricacies which set the sounds apart.


I think Wimfolsfessta can be described as a diamond in the rough; the product of a band who have a great deal of potential indeed. While it may not be perfect, it shows a tangible and very tasty degree of promise, and if the band can create an album of this caliber, I will definitely enjoy it. Tracks like "Flicker" especially, are superb.