Henbane,  more fully; "Henbane, or Sonic Compendium of Black Arts", is the second album by Polish black-metal band Cultes Des Ghoules, and was released earlier this year; I can't remember where I heard about the album, or the band in general, but I decided to buy it blindly, which is sometimes the most enjoyable way to discover new music. When it comes to this record, reading the title is all you really need to do to work out that you're probably in for an interesting listening experience, and I can safely say my expectations were met, and more. 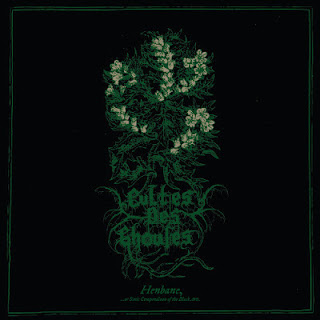 Cultes Des Ghoules bring a lot into their music, both in terms of creativity and influence. Under the flag of raw, scathing black-metal, there are elements as diverse as the chunky but malevolent feeling of A Blaze in the Northern Sky-era Darkthrone, to the dissonant, wailing guitar work of bands like Blut Aus Nord. In this respect, the record manages to feel like vintage black metal, but at the same time, the band manage to assemble it in quite a fresh and novel way; it's not quite a brand-new interpretation of the genre, but it is what's good about it, being played in an exciting way - a very triumphant merging of the old-school with imaginative innovation and a lot of thoughtful song-construction. I think my favourite juxtaposition on the record is the coming together of the primitive and grandiose; pounding, hypnotically repetitive primal riffs and simple but crushing drum-beats merge with a deeply tangible feeling of ambition and direction; the sepulchral atmosphere which the record delivers is more complex than the literal musicianship, but somehow very complimentary to it - something I'd consider to be the great secret of black-metal; that is, the fantastically present atmosphere delivered by chords and beats, which need not be self-indulgent or even technical; instead, the riffs bring with them a horror which only black-metal can. The atmosphere on Henbane can quite well be summarised as that. Not soaring, not majestic, simply downright scary; the soundtrack to being cast into a pit of unseen, shadowy demons, all of them ready to tear you limb from limb. Henbane delivers terror and malice, and captures it very well indeed, with the sheer murkiness and filth-encrusted production really burying the listener in a claustrophobic grave.

One of the crowning features of the record is the vocalist, who has taken a leaf from the book of just about every influential black-metal vocalist around, and the diverse approaches they take to vocal duties really make the album special. A lot of extreme metal vocalists are content with a single style, but what Cultes Des Ghoules remember is that you don't have to settle for just one. Throughout the record, there seem to be influences from half-a-dozen or so vocalists; everything from the dessicated, mangled whisperings like those of Arioch from Funeral Mist, right through to Attila Csihar style roaring, and even the maniacal, melodramatic cackling style of Big Boss from Root. The variety in the vocal department certainly makes the record even more fun to listen to; more dynamic, exciting, and it even makes the atmosphere a little darker. Like the bands first album, this isn't the kind of record I can listen to while reading or relaxing - it doesn't let you, and I'd expect that that's what the band aimed for. Another pleasing feature of the record is that the long songs, and they are rather long, really seem to justify their length. Henbane is definitely not an album which drags along, despite many of the songs on it (read: all but one of them) being over ten-minutes in length. Even with many of the riffs being quite hypnotic and repetative, they slowly, subtly change and undulate in a way which makes them really enjoyable to listen to, even when a single riff can last for near minutes, or recur a lot through the course of a song, there isn't a single track on the record which outlives its welcome.

Ultimately, if you have a bit of a thing for black-metal which gives the listener the experience of what it's like to be soft, vulnerable corn being ground remorselessly between harsh, unrelenting millstones, this is probably the sort of band you want to be listening to. Henbane, and Cultes Des Ghoules other work too, is exciting, old-school, harsh, murky, malign and very, very well-made. I thoroughly recommend it.