One man black metal is, without a shadow of a doubt, the approach to black metal which tends to be the most prolific and inventive, but also brimming with the unfortunate potential to be derivative and at times catastrophically unexciting. Fortunately, Canadian one-man project Paths seems very much to be the former, positive pair of words, and not the latter. Perhaps it's a good sign when within a few minutes of listening to a record, one can tell that it's going to be an interesting one. In this case, the record is Paths' first release; "I Turn My Body from the Sun". 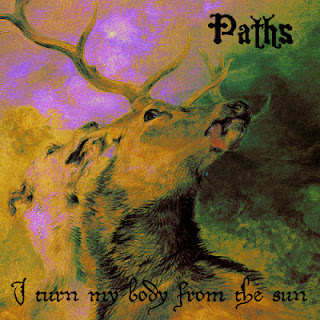 "I Turn my Body from the Sun" is a demo, so I consider any shortcomings it might have in terms of production, dents in it's over-all gleam, as it were, to be instantly excused, although pleasingly the album doesn't have much to complain about in that department. The production which it has needs little improvement, suiting well the albums warm, deep, psychedelic feel. Aside from the occasional strange-sounding cymbal hit, the sound from a mixing and production angle is very agreeable indeed, and down right fits the music like a glove. The music itself is great in terms of musicianship; the instruments really interract with one another, and the drums sound very real, presumably through good sampling and programming, or quite literally, through the drums being, well, real, although going by how tightly coiled they sound in places, they probably aren't. Indeed, Paths doesn't seem to suffer from many weaknesses of the typical one-man-project. Of course, of greater value, perhaps, than tone, production and tightness, is what the music itself does; not the instruments that made it, but the sound that it created. As I said in the introduction, what Paths creates seems to be interesting indeed, bringing together in various measures the majestic, sorrowful and wailing synth of Burzum's Hvis Lyset Tar Oss, the crushing, colourful and bleak presence of a Ahab, and the downright sonic-weirdness of bands like Blus Aus Nord, all mixed carefully and with a generous dose of originality in it's own right.

At the same time, however, it's hard to be sure if the record is malign, benevolent or indifferent in terms of it's persuasion; while at times it feels very misanthropic, as the title may suggest, the psychedelic aspects of the music create a different picture; something not quite light or dark, but instead something very neutral but beautiful; like that hazy place where both sorrow and elation can lie, this demo carries that ambiguity. Likewise, there's a very tangible confusion between whether the humming, shimmering and deeply hypnotic psychedelia which seeps through the whole demo is the fun kind, or the unnerving kind which dances at the edge of the void. This does a good job of illustrating, that to many records, there is as much beauty in what it keeps a secret, as what it reveals to the listener; this very much comes across as the sort of album which I can take cheerfully of sombrely dependent on how I want to hear it. Whatever the truth of the matter, it's the sort of atmosphere which leaves you content to be hypnotised by it; Numerous times through this review I found myself to have been staring at the screen for a solid five minutes instead of writing anything. I think that can serve as a testament not only to the fact that atmosphere in music is very powerful, but also that I Turn my Body from the Sun is a good example of atmosphere which is extremely well crafted. The entire demo is a head-over-heels journey through chiming, dreamy landscapes, and you feel almost literally altered in state by the time you reach the end.

Ultimately, I Turn my Body from the Sun is very much worth listening to, indeed, it's extremely impressive for a first release, and a demo at that. While I may well be in a state of being residually wowed after listening to the record, I think I might retain for much longer my instinct that Paths are probably a band worth getting excited about.