#024 Megadeth - The System has Failed

"The System has Failed" could be considered Megadeth's post-comeback album comeback album. "The World Needs A Hero" had already begun the job of restoring Megadeth into a more metal direction, but, due to injury on Dave Mustaine's part, the restoration stopped there for some time. This album marks a full, unrelenting comeback to Megadeth's older, heavier style, but manages, in spite of this, to be a unique and noteworthy album; It even has the temporary return of the band's semi-original guitarist, Chris Poland. 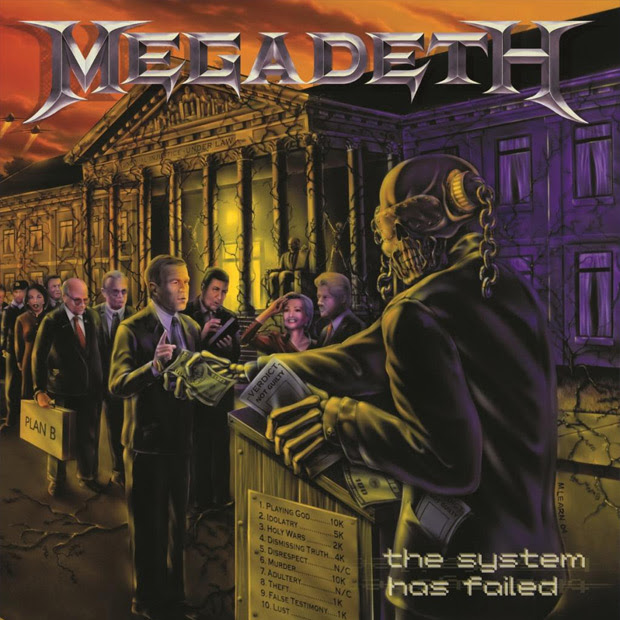 As an album, The System has Failed offers a very mixed bouquet of music, with a lot of styles which hadn't been seen in Megadeth for a long time, or indeed ever. Chris Polands playing style does something for this album, something hard to pinpoint. Songs such as "My Kingdom" have overtly Poland solos, but the entire album has a a certain something, with Chris and Dave's playing styles merging to create something exciting, and different from anything which has come before it. I get the impression that this is what Megadeth would have sounded like had Poland accepted the offer to return to the band to record "Rust in Peace".

This album certainly has a blend of "old" and "new" Megadeth styles, with songs such as "Kick the Chair" sounding like they should have been on "Rust in Peace" and other songs sounding quite unlike anything done before, such as "Truth be Told" which is a crushing but melodic rampage, using extremely moshable riffs, and excellent lyrics and vocals. Overall, the album is something very different, and, retrospectively, marked the  beginning of a chain of high-quality efforts by the band.


Granted, this album has a couple of filler tracks, for example "Shadow of Death" does very little for me, and "I know Jack" leaves me wishing it had been extended to be at least two-minutes, but aside from those two, there are essentially no weak tracks at all, with each one being unique, refreshing and powerful.

I give this album 9/10. It's some of the best of Megadeth's recent material.