In 1981, The world was shaken by a raucous band of Newcastle lads, who had grown tired of the NWOBHM's oversaturation and mainstream success. Venom were about to leave a cacophonous dent in the nicely polished surface of music, with one of the most significant and Influential albums in Metal; Welcome to Hell.

The album's influence is very plain to hear. You can hear the future in it very clearly, with the Proto-thrash riffs, in a style which would later be adopted by bands like Slayer, and Megadeth, and Satanic, dark imagery which was a heavy influence on the early Black Metal scene, although the fact that Venom's follow up album is titled "Black Metal" was probably equally significant. These factors, and more, plead the case that "Welcome to Hell" was an album ahead of it's time, although it is probably more accurate to say that Venom Invented their time. 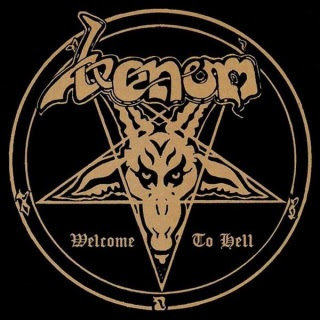 Most of the songs on the band would later become prime example of Venom's style, with Guttural (but not screamed or growled) vocals, and utterly Bulldozing riffs backed up with distorted bass. For instance, songs such as "Angel Dust" and "Live like an Angel" would be my answer to anyones enquiry as to what Venom sounds like, or, indeed, what metal itself  sounds like. Contrastingly, "Mayhem with Mercy" is a chilling and beautiful minute long instrumental, quite unlike any of the other songs on the record.

The guitar work on most of the songs is instantly recognisable as being of a very Thrashy style; very fast and technical, however, being a three piece, the technical proficiency of much of the Thrash which Venom inspired is lacking, although this is more than made up for by the sheer speed, inventiveness and wallop of their music. In 1981, Venom were the Heaviest band around, and they weren't afraid to live up to that fact.


This album is potentially the source of much of the influence of Thrash metal, Black metal, and other forms of extreme metal, although it itsself is in many ways unlike any of them. This is advantageuos, as it can be appreciated by Metal fans of more or less any persuasion, and as you listen to it, you get the feeling of listening to a piece of hugely influential musical history, which adds to it's power.