"Burnt Offerings" was Iced Earth's third full length release, and marked the emergence of the bands most recognised sound, with a a more power-metal edge, compared to previous releases, and the talents of Matt Barlow taking up vocal duties for the first, but certainly the last, time. Burnt Offerings is very much a textbook example of Iced Earth's style, with the band having grown comfortable and experienced, but still having something to prove, still being filled with youthful energy. 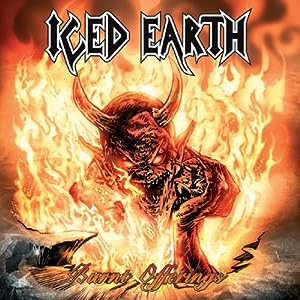 The first thing anyone listening to Burnt Offerings is likely to notice depends heavily on what is being looked for; This really is an album which has, well, more or less everything. The speed and agility is there, for each and every band member is a master of their trade. Those looking for beautiful, atmospheric songs will find it in the albums softer pieces, such as "The Pierced Spirit", and those looking for lengthy epics? well, the last track is a sixteen-minute monster, and a track about Dante's Inferno, no less.

This album was released when the band was very much a Thrashy affair, but they are never afraid to unleash the occasional keyboard, which they use to good effect, with few of the issues which can occur from misguided keyboard use. There are also quite an abundance of effects which cannot be repeated, such as multiple, overlapping vocal tracks by Barlow, which, despite creating the potential for making songs unplayable at a live level, the band manage to defeat this and perform the songs live with great gusto.


Many regard this album as being a bit confused; Not quite the style of their early days, certainly not the style that was to come. However, this "confusion" is definitely open to interpretation. some say it's confused, but I prefer to think of it as being the best of both worlds. My only criticism is that, despite technical excelency, some tracks just feel a little bit like filler. I'll leave you to decide which tracks those are, to avoid clouding your judgement.