Well. This is the last one for doom-metal month. In the coming days, it's back to metal of all tempos, all persuasions, and all sub-genres. For the last review of the month, here's something from a very, very old-school band.

Black Sabbath formed in 1969. Pentagram formed in 1971. Take a moment to think about that, because that's not much of a gap. As such, Pentagram are widely hailed as one of the foremost doom metal acts. The key difference between Pentagram and Sabbath, of course, is that Pentagram didn't release an album until 1985, and in general, have had a fairly chaotic and mildly confusing career, to say the least - I certainly can't claim to have any idea, despite trying very hard to do some research beforehand. Today, I'm looking at one of the bands 90's albums - 1999's "Review your Choices". 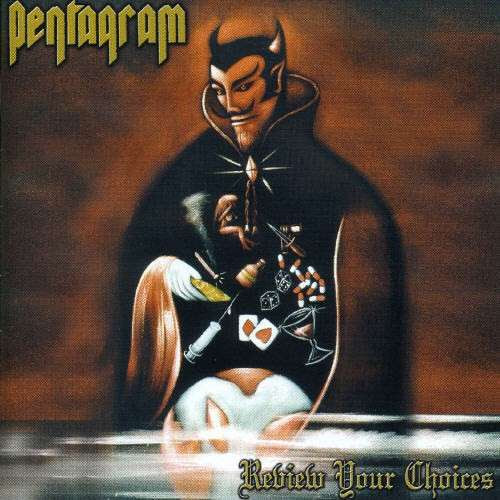 Pentagram's sound really comes from the oldest classroom in the old-school of doom - from when the music wasn't so far distanced from rock n' roll, and when slow-tempos weren't so emphasised, but instead just seemed to happen. Review Your Choices, while a record almost of this century, certainly sounds akin to something which wouldn't be so very out of place in the late-seventies or early eighties. The music is very Sabbath-like, perhaps with a little of the whimsical giddiness of Jethro Tull, particularly in the title-track, which has a jumpy enthusiasm, but also a dark air of warning - as the lyrics suggest, "there's a man with a pitchfork around the bend". In what could be considered poignant, that really feels like what doom metal, in the Black Sabbath tradition, does. It looks you in the eye, and tells you to watch out, because the world is a nasty place, filled with nasty things, and then it makes songs about them. Review your Choices certainly holds this true, as an album - it's dark, sardonic and more than a little pessimistic - a truly archetypal album of its genre. The combination of the guitar and bass tone is strikingly dark and brooding, enveloping the other instruments, and creating a mix which is a little bit chaotic, with everything perhaps slightly disconcerting in terms of where they are in the mix - the vocals sometimes echoing through, and at other times muffled - In the end, however, the production suits the reeling music rather well.

There are parts of Review Your Choices which are sufficiently fuzzy and bass-driven to render them genuinely claustrophobic, which in my experience, usually isn't something which early doom metal did very much, the occasional eerie, self-titled Black Sabbath song excluded. The tone of such music was undeniably very heavy a lot of the time, but it never quite seemed to have the speaker-wrenching properties of more modern stoner doom and it's neighbour-disturbing associates. Review Your Choices, in this respect, feels like it's taken influence from the fuzzy, crushing material which was very much existent within the doom-metal world by the time in the late nineties that it came to be written. Fuzzy, crushing material which, interestingly, was probably influenced by bands like Pentagram in the first place - perhaps the album is an example of real reciprocal synergy of influence within a genre. Whatever the truth of the matter, the album is deceptively heavy - it was only about half way through it that I realised just how much it was making my brain-cells vibrate. The guitar roars, and the bass-drum sounds like thunder, but at the same time, the music isn't devoid of subtly, with enjoyable wailing lead-work and the occasional embellishment, rendering the album a good, old fashioned "riffs, drums n' vocals piece" but one which is not without a dynamic and interesting edge, travelling between eerie beauty, disconcerting sections, and warm, mind-altering riff-work which really is up there in the league of Electric Wizard, or any respectable stoner-doom band, in terms of sheer wide-eyed brain-rattling rumble.


There are doom albums, and there are doom albums. Review Your Choices really feels like a fantastic specimen of the genre. Pentagram may have had an odd, rather non-linear career, but albums like this one serve as a real testament to the fact that that they are a band who will leave a hefty legacy. It's been a pleasure reviewing only doom metal for a whole month, and this feels like a fitting end to it.

The next review won't be doom. Maybe the non-doom fans in my infinitesimally small readership will return soon...