From stoner doom, now, to a different place entirely, where doom metal has an atmosphere which is high in an entirely different way - the lofty, epic world encountered in Candlemass' second album - Nightfall.

Candlemass are a name thoroughly synonymous with epic-doom. The genre title itself, aside from describing perfectly the music one has in store listening to an album in the style, was also one coined by the band, with their debut "Epicus Doomicus Metallicus" certainly placing a name to it's own musical persuasion. Nightfall is the band's second full-length album, and is regarded as a classic - the first truly "classic" doom record, but not the last, that I plan to take a look at in this month of doom. 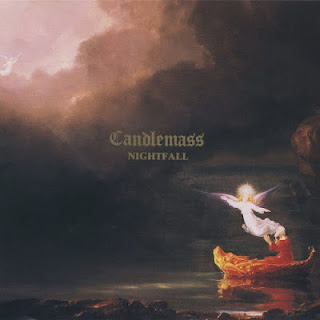 Epic doom is an interesting mixture of things - bits and pieces of conventional doom, traditional-metal, and more than a few operatic leanings all come together. The result is more airy and often more intricate than it's more conventional cousins, and at times, it is indeed more energetic and fast. Nightfall certainly has songs, like "At the Gallows End", which conform to this type, but, like the genre itself, it is still undeniably doom, and plenty of the album pounds away at the lower tempos quite contently, and very much effectively. It doesn't take much time or cognitive work to figure-out why it's called epic doom either. Nightfall is massively grandiose and, to overuse a phrase, very epic. In my experience, however much one loves metal, and in my case, that means a lot, listening to a Candlemass album like this one, or any similarly grand sounding metal-record very much carries a sense of formality - it feels higher than "plain-old-heavy-metal", despite there being no reason for supposing the latter to be in any way illegitimate. Throughout nightfall, above the crunchy, perhaps a little humble, guitar tone which propels the music along, all sorts of angelic epic parts soar - powerful synth seeps through the music, elevating it and giving is a vast atmosphere - the sort of thing which would sound superb in a cathedral, or flowing through the stones of some ancient auditorium.  Joining the synth is the golden, glowing lead-guitar, which weaves gorgeous and superbly memorable melodies and solos, which are often the musical aspect which really being the songs into their own.

One of the most notable features of the album are the extremely talented vocals of "Messiah" Marcolin, who delivered vocals on this, and a number of the bands subsequent works. I'm generally poor at reviewing vocals, and they're certainly a sphere I don't explore as much as the other aspects of a given album, but Marcolin's vocals immediately struck me as interesting to listen to - Aside from being very operatic, even theatrical, I also find them unpredictable to listen to - The notes which follow from one another aren't always the notes you were expecting, or even the ones which a music-theory purist would entirely approve of, but they are nonetheless very clearly deliberate and performed with great talent. This idiosyncrasy has the effect of rendering the vocals on the record extremely haunting, often in a beautiful sense, and also quite eerie - while the album is certainly one with a beautiful atmosphere, there are constant reminder that metal can also be devilish and a touch maniacal. They blend extremely well with the poignant, steady crashing of the drums, and the general, not-too-polished epic melody. I say not too polished, and mean it in a positive light, as musical grandiosity certainly doesn't mean perfectionism - the record hasn't taken hundreds of takes, and hasn't been painstakingly edited and produced, and frankly, it's far better for it, than if the band had taken the (relatively easy to grasp at) decision to have pristine, sterile production. I'm glad they didn't.


Nightfall is definitely on the required-listening-list for epic doom as a sub-genre, and sadly the album one which I discovered far later than I should have - I'd been enjoying epic doom for months before trying out the very fathers of the genre - Candlemass. Songs like "Samarithan", with it's fantastic crescendo and beautiful narrative, is reason enough for any self-professed doom enthusiast to be motivated to give the album a listen.

I'm not sure what I'm going to look at next, but it's going to be more doom...