Time for another doom classic now, as I swear angrily at my faulty internet connection, and realise that the red, italicized writing is more or less redundant...

As far as doom metal goes, there are many who consider Cathedral to be essential listening, and it's no surprise, as Cathedral are definitely one of the bands who have been hugely influential in the doom-metal genre as a whole, despite being a decade junior to bands like Saint Vitus and two decades younger Pentagram and Black Sabbath. I can safely say that they were among the bands which acted as my launchpad into the genre, and beyond that, are one which I still appreciate more and more as I listen to their music. 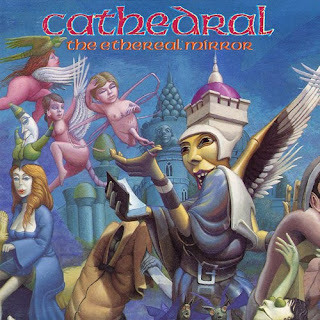 Cathedral may have not been the first doom band, by any stretch of the imagination, but as I mentioned above, they contributed a lot to the genre. At the same time, however, Cathedral are an extremely distinct act - It's almost impossible to mistake a Cathedral song for something else, and the bands mind-altering, trippy blue and purple artwork is recognisable in a record store, or on merchandise from a matter of miles. Even if the artwork of the Ethereal Mirror, the album I've chosen to focus on, seems to obey the laws of Euclid, the doom-enthusiast still has to come to terms with the fact that the artwork  has a seemingly mono-winged figure with a hat made out of a castle. Focusing on the artwork rather than the musical content may seem an odd move, however, I wouldn't want to start a Cathedral review without a respectful nod to how iconic the bands artwork, from almost all of their records, can be. Why The Ethereal Mirror? you ask. Tempted as I was to take a look at the more widely revered "Forest of Equilibrium" - one of the all time greats of the doom genre, that's undoubtedly an album everyone has something to say about - I enjoy, at times, to defer to the other albums in the discographies of bands like Cathedral, in the name of variety. The first point of notice in The Ethereal Mirror, in terms of difference from it's predecessor, is that it's a considerably faster, more dynamic record, with shorter songs, higher tempos and, generally speaking, perhaps a more accessible sound, foreshadowing the bands faster, thundering stoner-metal future.

The second observation is how wierd the album is, in the utterly quintessential Cathedral fashion. The riffs sound inventive and bendy, more intricately woven than your usual chord-after-chord-after-chord carry on. The Ethereal Mirror does a fantastic job of being full of mid-tempo doom riff-work which doesn't sound like cliché, stereotypical doom riff-work. I think it certainly says something about Cathedral as a band, being able to produce work which is overtly high calibre doom, but at the same time, managing to sound refreshingly unlike other doom. The Ethereal Mirror is undeniably one of the faster albums I'll be looking at this month, and it's tempo lies far in excess of it's predecessor, with the exception of Soul Sacrifice. The point I'm distilling from that, is that the album is one which manages to test the ceiling, and not just the floors, when it comes to the genre's tempo. Even the slower tracks have a certain swagger, above a plod. Presiding over the psychedelic riff-ride are, of course, the vocals of Lee Dorian, sounding awed, excited and at times a little maniacal. What washes through most distinctly is a sense of real enthusiasm, and you can tell that, not only do the vocals fit, but he is really enjoying performing them. The lead work is really enjoyable too, with dancing, slightly unsettling melodies and solos, which make the music vibrantly colourful, but somewhat twisted - like being carried away by a beautifully exotic carnival, but at the same time worrying where exactly they are taking you.


The Ethereal Mirror is one of those albums which feels unrelentingly solid - not just in how the songs sound, but in how complete it feels - certainly a case of the right songs being in the right order, and moreover, managing to maintain a single atmosphere, but at the same time concede to variety and a dynamic listen. It's all I ask for in an album, generally.