In this month of doom reviews, focusing on a single aspect of metal doesn't necessarily mean a lack of variety, and I definitely want to capture that variety when it comes to doom metal. Today, we'll be looking at funeral doom, one of the darkest, murkiest members of the doom family.

In my experience, Ahab are usually one of the first bands mentioned, in any given conversation about "funeral doom", and they are certainly the band which got me into the genre. As I said with regards to epic doom last time, funeral doom is one of those sub-genres the name of which sounds like what it is. As albums like Call of the Wretched Sea, Ahab's debut, can show, funeral doom can be as atmospheric as any epic doom. 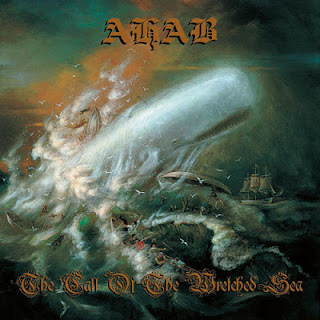 As the artwork suggests, Call of the Wretched sea is an album which is heavily, if not entirely centred on the ocean, and whaling. I don't know what it is about the human understanding of music which gives us the blessing that we can hear certain sounds as being "like" certain things in the world, but whatever is is, Ahab use it to full effect. I haven't listened to many albums which sound more like the sea than this one. From the aquatic, haunting synth intro at the start of the album, to the crushing, submerging dirge of guitar, pulsing like waves on the ocean, and with the claustrophobic, pressing presence of the music leaving the listener feeling like they are being submerged in it's vast expanse. After all, like the atmosphere of the album, the ocean is massive, but also something one can be very within. The music utterly captures this, and while the atmosphere is vast, it also feels close, and grips you tightly, like the ocean itself. It's not the sort of atmosphere which makes you soar on majestic wings, but instead grasps you, and holds you tight, while at the same time being just as beautiful. The intense grip which the music can take is very well symbolised by the albums artwork - the inherent beauty of the painting juxtaposed with the brutal destruction it depicts, both of man and whale. The power and crushing hammer of the riffs and extremely deep vocals feel very overtly like a meeting of beauty and heaviness, and while other styles of doom can do this, they often don't sound anything like as dark, haunting or ethereal as albums like this.

The aspect of the music which brings the album furthest into my enjoyment is the hauntingly gorgeous lead-guitar, which is used fairly frequently throughout the entire work. The smooth, golden threads of music weave an extremely dark and extremely beautiful atmosphere, although neither of the two words do it justice - it feels very much like confronting something ineffable - there's a huge sweetness and yet bitterness in the music, particularly given life through these lead guitar parts. The atmosphere is left with an echoing, almost nostalgic tone, contrasting with the rhythm guitars gargantuan heaviness, providing both unforgiving vastness, and the perhaps oppressive, yet extremely comforting grip of the sea - the notes feel, and sound both close and afar as they are played. The steady, at times subtle drumming certainly adds itself to this feeling, with each snare hit, especially in the lowest tempo sections, sounding vast in it's relative isolation from the next drum-beat to come - funeral doom has one of the lowest tempos of any of the doom-genres, perhaps second to drone music, and Ahab certainly explore tempos with very few beats per minute. The album remains quite dynamic, however, with plenty of tempo changes keeping the music interesting, which, when combined with the lead guitar sections, leaves the listener with a very distinct memory of every song, from the very first listen.


Call of the Wretched sea is definitely the kind of album which it feels like you've more than merely listened to by the time it has finished. The kind of album which you enter, and exit, and what happens to you between these times is very overtly different from the rest of the day. When the end arrives, like the end of a film, it takes a few minutes to adjust and retrospectively work out what just happened. The answer I usually arrive at, is that I've just listened to an fantastic record.