#263 Solitude Aeturnus - Beyond the Crimson Horizon

One day, whilst trawling through bands fairly randomly, I happened upon epic-doom veterans Solitude Aeturnus, entirely by accident. I'm not sure how I'd not discovered them before, as they were certainly the sort of thing I was, and absolutely still am very into, when it comes to doom metal. Epic doom, I'll hazard, is actually the first taste of doom metal I had - the other varieties came later to me, and, before this month of doom runs out, in a few days time, I thought I'd stick another epic-doom review in somewhere. As it happens, that somewhere is today. 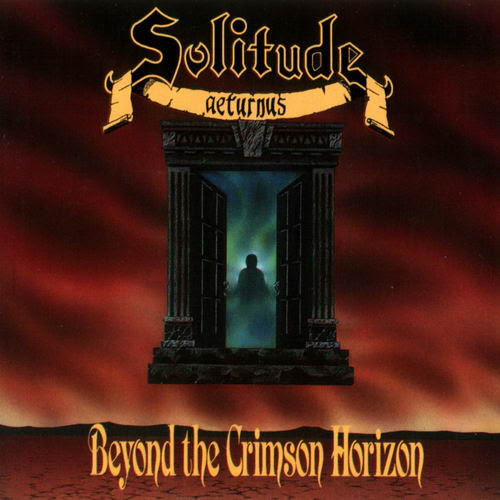 Beyond the Crimson Horizon is Solitude Aeturnus' second album. If I was asked to put a date on this album without first knowing, I'm not sure if I could. Not only that, but I'm not sure if It sounds older or newer than it is. Ultimately, I think that bodes well for it - it's organic, no-nonsense charm carries a vibe of the eighties with it, but at the same time, it has that certain something of later times on board too. In fact, the album was released in 1992, and, I think it can be safely said, is the sort of album which the nineties really needed. Like its artwork, the album feels warm, perhaps even a little dusty - the dust of the red desert sunset, however, , and not the dust of disuse. Beyond the Crimson Horizon really feels like an album which brings together the accomplishments which metal had already under its belt at the time, and the influences audible in the record are overtly diverse. While consistently mid-tempo, the record manages to bring groove-laden riffs, very traditional, perhaps even speed-metal style vocals, and the occasional distinct triplet which wouldn't be unwelcome in eighties-thrash, and unite them under the unmistakable marching, thumping swagger of the kinds of epic doom which bands like Altar of Oblivion are playing now...  demonstrating my innate ability to discover metal bands the wrong way round, starting on the inspired, and moving back in time towards the inspiring. Albums like this, it seems to me, are inspiring in more ways than one - it's certainly refreshing to see that non-extreme metal was covering some ground in the nineties, dispelling perhaps, the decades ruinous reputation.

One of the characteristics of epic-doom which this album is practically a textbook example of is the fact that, for a decent chunk of it's running time, it's not all that doomy - a lot of the time, the tempo is high enough to render it traditional metal that's stuck in a traffic jam. At the same time, however, as with bands like Solstice there is still, no matter how close to traditional-metal it strays, something which anchors it in doom - and at times, it's not necessarily the tempo that does this. There's just enough murk, thickness and epic emphasis on chords to keep the record in the doom-sphere, demonstrating, perhaps unintuitively, that tempo is not everything when it comes to a genre which is by default slow. Two things which this album really goes to town with are the vocals, and the synergy between instruments. The vocals are, from the onset, impressive; grandiose, but not pretentious or cheesy, in the way power metal vocals might be. The vocal hooks are both memorable and powerful, without being over the top in a way as to shatter the very honest and earthy atmosphere which the album possesses. Beyond the Crimson Horizon is, it must be said, one of those albums which really reconciles being down-to-earth with being immensely epic and powerful - the sort of album which isn't insistent, but will blow your socks off it you let it. Secondly, the assembly of the parts into the whole is really something to behold. The album reminds me of those ancient blocks of stone from Latin America, which are so tightly slotted together that you can't fit a razor-blade between them. The guitar and drums are very exact, resulting in incredibly percussive and solid sound, with the chords and the drum-beats without fail manage to take off at exactly the same time.


Solitude Aeturnus is a band I'm rather shocked to have taken just so long to discover, especially considering that albums like Beyond the Crimson Horizon very much tick the majority of the boxes for what I enjoy in epic doom, and beyond that, music in general.