Welcome to the first review of March, a month I've decided, quite arbitrarily, to dedicate to the interesting beast that is doom-metal. I plan to write reviews of well-established, and up-and-coming bands, and write a few  features solely dedicated to the sub-genre, for the entirety of the month. If you're a doom fan, be sure to check back from time to time to see what I've been up to.

Pallbearer are a band I've heard about here and there on the breeze, and one I eventually got around to listening to during the process of realising that there are a lot of new doom-bands out there at the moment, making a name for themselves. I wasn't sure what to begin this month of doom with, and a review of Pallbearer's début full length album, "Sorrow and Extinction" seemed as good a beginning as any. 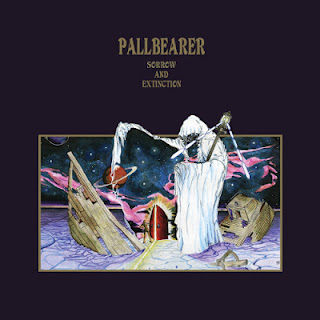 There are numerous qualities which I associate primarily with doom-metal, and I can safely say that I picked up quite a few of them coming from Sorrow and Extinction - The album brings rough, crushing chords, crashing like waves onto a shoreline - but at the same time, it's a serene shoreline, with a lot of beauty. One of the first lines I though of while I first listened to the album, with a mind to reviewing it in future, was that this is doom-metal for the sunshine, not for the murky, rainy days. The vocals, as if sung from the top of a sun-soaked spire, soar high above the rest of the earthy, churning instruments - the slow, steady drums and tectonic, roaring guitars. I've not heard vocals like these in a while - they remind me somewhat of those from epic-doom outfit Atlantean Kodex, but at the same time, Pallbearer's vocals seem to be very idiosyncratic and memorable - through the album, the vocals deliver some fantastic melodies - each song has one, for the most part, and many of them are memorable from the very first listen. They're the kind of vocal melodies which are used often enough to embellish the songs nicely, but sparingly enough to feel precious when they arrive. In a lot of the songs, I found myself listening thinking "Oh, I hope the vocalist does that again". Likewise, the guitars deliver splendid, bright melodies which are probably on a par with the vocals, and certainly elevate the album heavenwards, speaking whispers of the epic side of the genre, particularly in songs like "Given to the Grave", in which synth is also called upon, to create a positively transcendent atmosphere.

Juxtaposed with it's brightness - even warmth, the album is undoubtedly sad. Perhaps not dark in atmosphere, but thickly laid with sorrow. The tower from which the vocalist sings is one of imprisonment, not elation, as they sing to the sea of crunching chords below. The lyrics certainly reflect this too, with poignant and poetic language, which certainly seems to add to the albums epic scale, and definitely makes it something of a journey through melancholy. Interestingly, for its scale and high majesty, the album isn't one I'd immediately label "epic-doom" - the epic atmosphere feels a little more organic than that - not insisting upon itself, in a contrived way, but instead coming across as just what happened when the band got together, wrote material and made music. In this respect, the album seems to make the best of both worlds, it's feet don't leave the ground absolutely, as reflected in the retention of an earthy, shuddering roar - even some stoner-doom psychedelic tendencies and notes which bend and sway almost merrily here and there, but at the same time, the music very much has its head in the clouds, and hauntingly, mournfully so. I don't often run into an album so intense, but at the same time, utterly listenable; I lost track of time more than once whilst listening to the album, and the songs seemed to fly by, despite their typically hefty length. Perhaps that says something about how absorbed the album can make the listener, whilst at the same time not making listening a chore. It's great when albums do that.


As you can no doubt tell, I'm rather impressed by the album, and I'm already interested to see what the band do next. I must confess, obvious as it may seem, there are plenty of "essential" doom releases I've missed out on so far, but, to me, I don't think I've ever encountered something quite like this. That, I think, is what this month of doom-metal is about - not just celebrating doom, but helping me to discover more of it.