Welcome back, to the second review in a month dedicated to nothing but doom metal. Without further ado, it's time to take a look at Conan, and their primordial, bongwielding album of heroic stoner doom.

If you've never worn ear-plugs to a gig, you might instinctively think that their use might be a little bit rude to the band. Actually, I find them to make the music more clear and "well-produced sounding". The night I saw Conan live, last year, was also the night I forgot to bring my ear-plugs to the gig. Consequently, after a deafening set which made the floor, the walls, and my innards shake, my ears were ringing for quite some time. Any such sonic experience leaves you curious to hear studio material, which, promptly, I did. 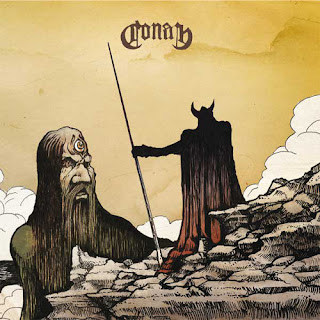 A lot of what Conan do, as do doom bands more generally, revolves around the riffs, of which Conan have a hefty, and thunderous stockpile. The bands riffs have two contrasting features; first and foremost, they sound primordial and brutish - as if instead of guitars, some long lost hairy race of people pounded them out on animal-hide drums. On the other hand, the riffs feel restrained, at times even minimalistic. Every chord is allowed time to simmer and rumble, even in the sections where the tempo rises a little. What emerges is in equal measures very powerful, and very clear, and all the more rewarding to listen to as a consequence. The soft but intense fuzz of the riffs never quite rises to a speaker-torturing level, but manages to spew noisily, and with a good deal of floor-vibration from anything you so choose to play it through. Not quite the skull-shaking, teeth-rattling insanity of bands like Electric Wizard, but instead a subtler, albeit no less powerful style, and one which isn't afraid to unleash some titanic lower-end. Joining the riffs are memorable vocals, which likewise utilise a straight-forward approach, the end result of which is equally effective as the straight-forward treatment of the guitar, and indeed drum work. Like the rest of the composition, the vocals manage to capture the primaeval, stone-cracking feel, with bellows and crystal clear yells which seem to strongly emphasise themselves, and really punctuate the music, serving both as memorable, and expanding the soundscape which the riffs create.

When you take a step back from the album, and in my experience of listening, only then, do you realise that most of the songs adopt a noticeably higher tempo than your usual fuzzy, wake-the-neighbours style doom metal. I think I can safely say that the album gains a real edge of this in terms of energy and flow - there is a pulse and vitality in the music which sometimes gets left behind, especially among the slower, more lumbering behemoths of the genre. That isn't to say that Conan don't also provide slow, earth-shaking sections which lend themselves to much rocking back and forth - there's a lot of that too - but it's a fair bet that the band have achieved an interesting balance between the energetic material,  and the grumbling, ferociously stoned sounding slow sections, and it's an album which is pleasingly more dynamic as a result. It's this fresh, dynamic feel to the music which I personally consider to be the highlight of the album, with the purring tone and crisp drums complimenting each other nicely. I wouldn't so much consider it a stoner-doom album to become lost in, and the band don't really indulge in too much psychedelic guitar playing, or embellished atmosphere, but in a way, that's yet another thing which is enjoyable - the album is a break from the trippy, Witches-Sabbath-filled place where this kind of music usually sends me, and my impression is that Conan are relatively straight-forward and proud of it - you get guitars, bass, drums and vocals, and no more - and with those four things, they have carved quite the megalith.


I'm not sure why I didn't review Conan within a few weeks of seeing them live, as I tend to do in similar circumstances. Ultimately, it's probably come in handy that I forgot to do so, because they're certainly a band I'm pleased to include in a themed month dedicated to what they do best. Frankly, I'm as impressed now as I was when I first heard the album.


Check back soon for even more doom...