#262 The Wandering Midget - From the Meadows of Opium Dreams

As this month of doom ploughs on, and it continues to rain, snow and be generally grey, I'm sometimes glad I can call upon colourful doom metal like this - The Wandering Midget...

Sometimes the name a band decide to give themselves can draw you in before you've heard a single one of their songs. A few weeks ago, I discovered a band which fitted that description exactly. With a name like "The Wandering Midget", I had to investigate this Finnish doom-metal outfit from the moment I heard of them, and having listened to this record a few times now, I feel it's about time to review it. "From the Meadows of Opium Dreams" is the bands second full-length album and is probably one of the most purple albums in my music collection. 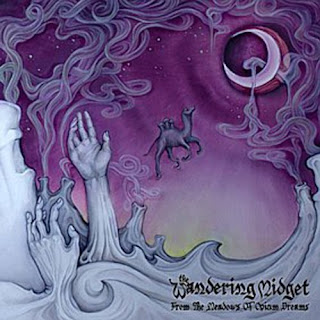 Four track doom records are something I've seen quite a bit of recently and From the Meadows of Opium Dreams is no exception - It gives the record a feeling of compactness, but on the other hand, also scale - The presence of any twenty-minute long tracks, of which this record has one, will always give an album a monolithic presence, and predictably, From the Meadows of Opium Dreams carries such a presence; when the album is talking, you listen. The album is, most strikingly, a real textbook example of a band making something grandiose without having to appeal to, and rely upon, embellishments to their musical recipe - A power-trio, but one which manages to sound far vaster than just three musicians. The depth and magnitude of the music on the record certainly belies the small assortment of instruments involved - merely guitar, bass, vocals, drums and a couple of effects here and there, manages to conjure something which really does sound dream-like and immense. The vocals, especially, are extremely powerful, a cross between very refined, almost classical baritone, and Saruman the White, which, I assure you, is as powerful and atmospheric as it sounds. Like a few of the bands I've looked at this month, The Wandering Midget seem to be a band with whom vocals are a real cherry on top, carrying what is already good doom to a whole new level, with soaring vocal lines which are memorable from the first listen - always, in my book, a definite plus.

Cruising below the soaring vocals are the riffs, which are certainly the second highlight of the album - the riffs tend to really feel like they're carrying a hefty atmosphere, with each chord really elevating the music, building up. Juxtaposed with this, the band also do a great job of subdued, mellow, and contemplative passages, which often last for minutes on end, really making use of individual notes and taking as much from their relative emptiness as what their content manifests itself as. The songs in general make full use of their running-time to build up and then crescendo enjoyably, whilst exploring plentiful stages along their journey - Songs like Temples in the Sky really feel like epics, whilst at the same time remaining close to the winning doom-formula, and staying refreshingly far away from pretentiousness or over-the-top-cheesiness - the record feels very organic and straight-forward, and the songs carry a sense of being crafted carefully and thoughtfully, yielding something which has been nicely, solidly made. In this respect, while the album perhaps doesn't invent anything wildly new to doom as a genre, it makes a solid opus of what is enjoyable about the genre already - granted, a band could have made this album fifteen years ago, but I'll always appeal to the fact that regardless of whether you think bands have made albums of this style before, by the truckload even, the fact is that that doesn't compromise the inherent quality of this album in particular - and as far as I'm concerned, it's an extremely enjoyable record.


As I've tried to illustrate for most of this review, From the Meadows of Opium Dreams is ultimately a very pleasingly solid record, and one which should appeal to most, if not all, fans of doom metal. It's certainly one which I've had a great time listening to, and one which really feels whole and complete.

I have no idea what I'm going to review next... keep tuned.