Look, it's not doom metal! You can come back now, oh portion of my readership who dislike doom!

From what I've heard over the years, Celtic frost formed the day after Hellhammer split up, which is speedy work to say the least. Indeed, the bands first EP, Morbid Tales, more or less picks up from the place where Hellhammer had marked with a chalk before concluding business. I've noticed that I have been listening to the band for quite a while now without giving them any attention in terms of reviews, and because Cold Lake doesn't exist on Youtube in it's entirety, I couldn't be a contrary bastard. Thus, To Mega Therion is the album I've chosen to take a look at, as it tends to take place as the band's magnum opus. 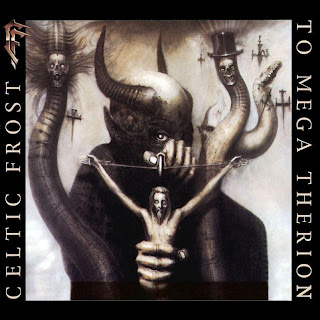 To Mega Therion has artwork which, without much controversy, can probably be placed among the top five-percent of album artwork ever. A horned creature using Jesus as a crossbow, accompanied by top-hatted somethings is, and always will be, among the most fantastically blasphemous things which metal has conjured. We have H. R. Giger to thank for that one. Musically, To Mega Therion was an interesting specimen for 1985, with it's sort-of-thrash, proto-black metal leanings no doubt sounding very alien to anyone who hadn't experienced Hellhammer, or at least, Morbid Tales. Certainly, I can imagine being puzzled by it if I listened to it for the first time when all I listened to was thrash. To Mega Therion manages to pack more power-chords per square inch than just about any other record of it's day, and is still relatively unique in it's sheer , overt riff usage. Riffs with next to no space between the chords really stand out as something which Tom G. Warrior really makes his own, with a hurried, frantic atmosphere as they rev and rumble along, frantically and hurriedly, as if they're about to miss the last bus home. The riffs are a hefty step up from the primitive work of Hellhammer, but at the same time, continue to carry an air of simplicity with them, albeit tighter and crafted with far more care - the riffs are angular, sharp, and more dynamic than much of what came before in the bands career. Likewise the drumming carries this standard too, with an equally frantic use of double-kick which has been almost never mimicked before or since. The production itself grants the drums a pleasingly organic clatter, and Tom G. Warrior's signature guitar tone certainly speaks for itself in terms of distinctness. Celtic Frost are, at the time of To Mega Therion, best described as one of those bands who don't sound like other bands.

Influential as Celtic Frost were to black-metal, I don't tend to buy theories that they were instrumental to its existence - The records don't bring much to the table that Hellhammer, Bathory and Venom didn't. In this manner, I tend to consign Celtic Frost in my mind to somewhere between the first and second waves of black-metal, chronologically as much as stylistically. Celtic Frost just exist, as opposed to feeling like part of a particular movement. In this, I don't at all suggest that Celtic Frost are uninteresting, merely that they feel apart from the rest of the tentative extreme metal scene of To Mega Therion's day. You can tell with regards to how the album sounds - the production and musicianship is markedly more tight and polished than that of Hellhammer, and it's fairly safe to say that the band didn't revel in rawness in the way that many of their distant peers did, which is something that many of their future records would go to demonstrate, for better or for worse. One impression that To Mega Therion gives very distinctly is a feeling of scale and ambition, something which was evident in some, seedling-like stage in Hellhammer's attempts to be grandiose, and have songs with some genuinely large scale, but is really delivered in a more mature form in this record - the Timpany, French-horn and occasional female vocals really illustrates that Celtic Frost were reaching up for higher degrees of scale than the vast majority of their peers, and it is perhaps this, more so than any of the more fundamental aspects of the music, which filtered through to more recent black-metal.


Based on personal experience, To Mega Therion is an album which takes a while to get into. For quite a long time, it was a complete mystery to me why it was considered the classic which, it now seems obvious to me, that it is. My words to the casual listener on the matter would certainly be that this is not an album which you can come to appreciate properly by listening to it just once. It takes a good half-dozen listens to do its magic. When it does, however, it's strong magic indeed.