Tsjuder's name doesn't lend itself to being pronounced, and it's always good fun to compare outlandish pronunciations of the bands name with other fans. Beyond trying to work out what noise a T, S and J make in tandem with one another, Tsjuder are also a very enjoyable band, playing, as so many bands have proclaimed to play, "True Norwegian black-metal"; what separates Tsjuder from many, however, is that they often manage to do a good job of it. 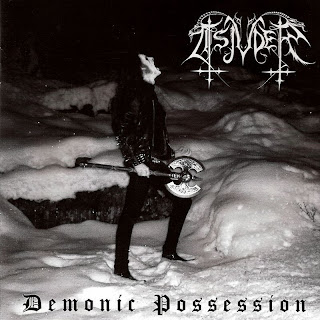 It took me a while to get into Tsjuder, and the first album I was exposed to, their début full length "Kill For Satan", bordered on not encouraging me to explore the band further. It's not so much that the album was bad, it was simply odd, and while it had moments which were extremely enjoyable, it's odd production and extremely strong death-metal lean really made the claim to be "True" black metal a little more purported than actually substantial. Fortunately, that didn't put me off too much; indeed, I did enjoy it, enough to take a listen to the follow up, "Demonic Possession" which this review is centred on. Demonic Possession, as an album, is an utter reconciliation between me and the band's music; the "True" label feels like it may, indeed, be the case. The album has many of the features which I genuinely enjoy about black metal, with suffocating bouts of intensity, joined at times with a subtle but epic majesty, and an ever-present rasping, roaring guitar tone which grabs the listeners attention. The album is well produced enough for the guitar-work to reall put on a show, being at the forefront, especially in moments such as the intro to Bloodshedding Horror, in which the murky, crushing guitar practically summons the dark legions from the pit itself. Structurally, the album manages well to be engaging and dynamic, avoiding being constant blast-beat work, but also avoiding being ponderous or primitive sounding; very much epitomising the second-wave black-metal sound. It's almost a must for me that black metal have more to the drumming than merely blast beats, which is probably one of the reasons I can greatly enjoy the percussion on an album like this, while I've never really explored bands like Marduk anything like as much.

As well as being dynamic, the percussion on the record is quite tightly produced; not plastic at all, but quite polite, with an organic, but likewise neat and tidy feel; Personally, I really enjoy the sound which results; it really feels like the best of both worlds, not encumbering the atmosphere, but not being needlessly buried and muffled. Overall, in fact, the production of Demonic Possession really gives it a nice, sharp edge; the instruments feel levelled in just the right places, and for the majority of the album, you can really hear what's going on nicely; the guitar work is really laid bare for enjoyment. The riffs, for that matter, are another greatly enjoyable aspect of the record. Tsjuder are one of the more riff-heavy black-metal bands I've listened to recently, and the guitar tone present really goes hand in hand with the chunkiness of the riffs; every chord emphasised, and the lead work ringing out crystal clear. Tsjuder are the kind of band who remember to have a lower-end in their music, and it can certainly be appreciated in the icy maelstrom which the record conjures, rendered heavier, and at times almost crushing by the deep, reverberating sound, akin perhaps to two Satanically possessed glaciers crashing into one another, creating a thick, and extremely Norse feel, very much akin to the archetypal Norwegian sound. In this way, Demonic Possession is an overtly old-school album, but manages at the same time to feel like an entity in its own right; not a homage to Norwegian black-metal, but thoroughly part of the gang - a worthy invocation of the style, and at times a great deal better than where a number of the genre's founders had ended up making by the turn of the millennium.


When I first listened to Demonic Possession, I can safely say it was perhaps the album which made black metal feel exciting to listen to again; really capturing the intensity, coldness and indeed madness which drew me into the genre some years ago. One thing is certain; the album feels so much more than simply "more of the same".