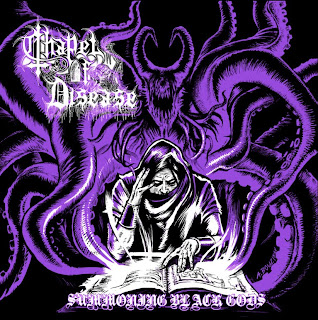 I'm told, Chapel of Disease are huge Morbid Angel fans. I'm about to commit a blasphemy by admitting that I haven't listened to a single Morbid Angel album. Before you arm yourselves with torches and pitchforks, I promise I'll listen to a few, and maybe review one by the end of the month. Either way, it will take more than torches and pitchforks to repel the eldritch horrors summoned by Chapel of Disease's music; The spoken words and clanging church bell at the beginning of the first track set the tone very well indeed; "Yog-Sothoth knows the gate... Yog Sothoth is the gate...". The album then awakens from its slumber, bring thick riffs, which a roaring, buzzing guitar tone which sounds like it could physically cut you. The band play death metal in a particularly thrashy manner, which is certainly to my taste; there are plenty of bands in the old-school death metal revival who sound thick and murky, in the style of bands like Incantation, but Chapel of Disease instead go for a sound akin to Vader, Asphyx, and many of the Floridian death-metal acts, sounding at times like a demoniacally possessed version of Death's older material, although as far as I'm concerned, pound-for-pound a little better. The album alternates very pleasingly between two vague styles; tremolo-laced thrash-riffs, with clanking, chunky drumming holding them together; sometimes double-kick, and sometimes fast thrash-beats which really help the riffs soar and charge along nicely, and darker, slower sections which really introduce tension and suspense, as well as helping to make the songs very memorable; The band demonstrate that while it's all very well to blast all the way through a song, it's often the slower sections which really make death metal something I appreciate.

Songs like "Descend to the Tomb" exemplify this really well, with constant, but not unwieldy, alternation between slow and fast sections, very much making for a dynamic track, but at the same time managing not to spoil it. The slow sections are enjoyable, and really manage to make the music feel dark and sinister; a little murky and very occult sounding indeed. The music really sounds like its lyrical themes, all of them horror related, which has always been what I prefer in death-metal - Lovecraftian, Occult and Supernatural themes have always felt somewhat preferable to simply gore and death. Another thing the band have remembered is that solos are allowed to emphasised and put in the spotlight, and there tends to be at least one in any given song; not a simplistic bit of lead guitar, either, but a well-constructed and memorable solo which compliments the song itself - something too few bands do these days, in any genre. The riffs too, certainly aren't neglected, and in places really hit what I like in terms of not only death-metal, but thrash, too; the music certainly carries the feel of very early death-metal in this regard, with the energy and attitude of thrash exuding through its pores in many places; there are a good number of riffs which really lend themselves to being energetic and punchy, while for the most part still retaining a dark, and more crushing death-metal edge; Perhaps the sheer solidity of this album is the reward which Chapel of Disease reap for being influenced more by the seemingly less-emulated thrash-laced death-metal than by more "pure" instances of the genre; the end result is certainly one of my favourite death-metal albums of recent years.


Summoning Black Gods is the sort of album which seems to sound progressively better the more times I listen to it; and with each fresh listen the parts I remember from previous occasions sound all the more rewarding to listen to. That, I can safely say, is what good albums do, and this is certainly a good album - with the band, and their peers, almost always without second full-length albums yet, I can't wait to see how they sound when they do.