Deviated Instinct aren't a band which immediately come to the lips of someone discussing British death-metal in this day and age. It's a shame really, and as someone who really enjoys the things punk and, more specifically in this case, crust punk, have done for death-metal over the years, I feel I really should spend some time to review some of Deviated Instinct's material. The album I've chosen to examine is their début; Rock n' Roll Conformity, and, at risk of sounding clichéd, it's an album which does not conform. 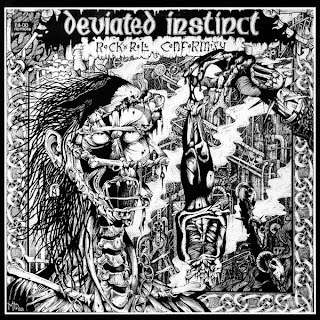 The twenty-seven minute running time which the album possesses is a fairly good indicator of it's character - the songs are short, almost always under three minutes, and the album as a whole is fast, abrasive and at times very angry indeed. I don't know anything like as much about crust punk as I do about metal, and by plenty of standards, I don't know anything about that either, but from the onset of the album, it's fairly clear where the punk resides. The riffs are extremely crust laden, with pronounced emphasis on chords, often with little to no lead guitar at all, aside from the occasional garnishing, to taste. The riffs themselves aren't overused, and there are usually a couple per song, which helps to make the tracks distinct, without trying to cram too much into their length - the two minute songs sound like two minutes worth of music, which stops the album blending into a morass of forgettable mess. Likewise, the vocals carry an extremely punk edge to them; snotty, snarling and angry, particularly in the faster, blast-beat driven sections which are heavily reminiscent of grind-core, but at the same time not quite - it feels subtly, and to my lack of knowledge, rather indescribably different. These sections are, however, more scarce than the overtly crust-punk sections, which churn and rumble, really cruising along in the way which all forms of punk seem to do a great job of doing. Naturally, the riffs are liable to be quite simplistic, in that chord-driven way punk-influenced material tends to be, but as opposed to limiting my enjoyment, I found the chord-driven approach to really hammer in the riffs into the anvil of my brain - the prominent bass, slightly haphazard paying, and enraged, frantic feel of all of the instruments not so much trying to keep in time, but trying to out do each other in their aggressiveness really makes for a tiring, but rewarding listen.

The album carries the flag which a lot of punk carries - you get the feeling that the musicians aren't perhaps the most accomplished on the planet, but you certainly get the impression they know how to hammer home their musical vision. It's the sort of percussive, primal album which causes the listener to breath a silent "fucking hell" after every track, and certainly would have done so even more in 1988, when we weren't so jaded and desensitised to extremity in music. In all honesty, perhaps owing to my limited experience of the crust genre, I'm not truly sure where the crust and death-metal intersect in the album's recipe; It certainly feels like both, in some ways, but the punk seems considerably more prominent, almost to the point at which I began to lose sight of where the death metal is in the albums volatile concoction of sounds. Of that same token, however, there's a perfectly tangible feeling of extremity to the music, and a roaring, metallic, chugging heaviness present which isn't so detectable in the more conventional crust of, for instance Amebix. The band's readiness to blast-beat their way through tracks such as "When the Chapter Closes, and unleash the sort of crazed, enraged, shrieking vocals which aforementioned bands like Amebix don't utilise certainly puts the bands sound on a different shelf compared to what I understand archetypal crust punk to be - perhaps a shelf closer to an even more primitive and rough version of the death-metal conjured by bands like Benediction and very early Bolt Thrower, the latter of which share obvious stylistic influences in terms of their artwork. Enough of me autistically pondering over where the album fits in the grand scheme of musical classification. Perhaps that's the musical lesson which the listener should take from an album like this - it doesn't matter what it is, only that it sounds enjoyable, which it certainly does.


In my experience, I often encounter bands which I consider to sound like no other. Often it turns out to be part of a scene, or niche sound other bands in which I simply haven't encountered yet. Whether or not this is the case with Deviated Instinct, I've greatly enjoyed their frantic, soaring and venomous music. Perhaps I've written about it without any direction or prior understanding, but at the end of the day, a good record doesn't quiz you on what you know; Rock n' Roll Conformity lives up it's name, and doesn't conform to what you know. It's all the more rewarding a listen for it.