"Unsung heroes" is a word which is thrown around a lot. I'm fairly confident that Manilla Road are a band deserving of the title, however. Releasing albums with a loving cult-following since their inception in 1977, and arguably dodged a cultural bullet by splitting up for most of the 1990s, Manilla Road are a band worthy of far wider reach than they receive. I'm never quite sure how to approach a band with such a loved discography, so I took the sophisticated step of picking "Open the Gates" because I liked the artwork. 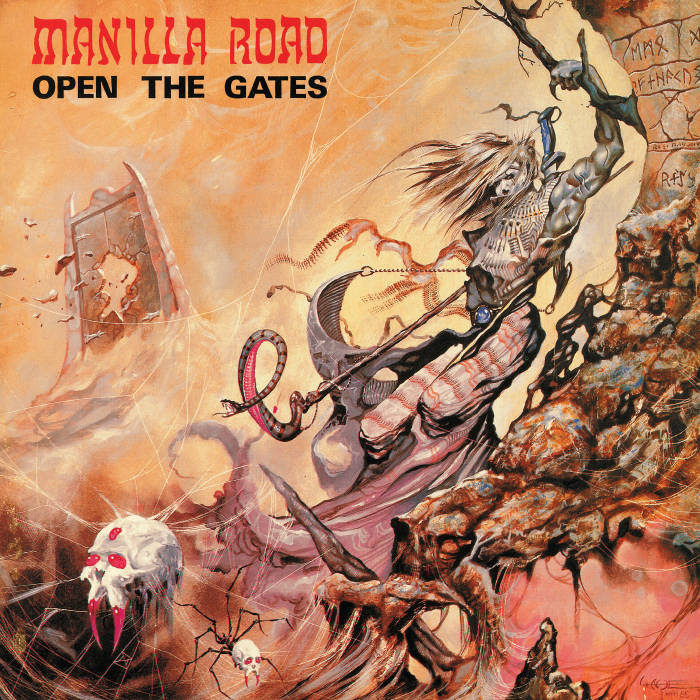 What the USA contributed to traditional metal before the existence of thrash is something frequently overlooked, but it's safe to say that bands like Manilla Road were among the groups to contribute. I'm not entirely sure where "Open the Gates" fits in the bigger picture of the band's history, but as their fourth studio album, I'm confident that this shows the band on good form - young, energetic, but also well rounded and experienced. The bands overall sound seems to be more influenced less by punk, as British bands like Iron Maiden were, and more influenced by traditional rock, which is reasonably apparent throughout the album, especially in the drumming style, which is more complex and embellished than that encountered in a lot of the NWOBHM. That isn't to say that the album sticks into a very thin band of style - in fact, there's a lot going on; Parts which sound very rock and roll in their intensity and groove are juxtaposed with heavier sections. "Weavers of the Web" has a heavy, speed-metal style riff which is a cut above a lot of the album in terms of punch, while "Heavy Metal to the World" is practically thrash. In addition to this, a decent portion of the album also carries an epic vibe, especially the nine-minute long piece "The Ninth Wave", which is something almost akin to mid-tempo power-metal, not least in it's King Arthur based lyrics.

The albums vocals, as ever provided by Mark Shelton, the band's backbone, are varied, from a traditional rock style vocal to a more epic sounding singing voice, which is put to especially good effect in the more theatrical, grandiose songs. The variety in singing voice highlights the way the album as a whole is put together - every single song is a little different, and while they fit together well, they also don't overlap hugely when it comes to style; It's as if, at this stage, the band were happy to do a bit of everything; Epic songs and attitude-driven ones sharing the spotlight. This gives the album something of a motley feel, but doesn't detract from it's flow - the songs sufficiently share attributes to make transitions between songs of different persuasions non-jarring. I found myself enjoying the epic material, which has quite a unique, non-cheesy atmosphere, despite it being about what would later be the cliché power-metal subjects (Dragons and other fantasy) as much as the heavier music, which offers a memorable and energetic injection of rock and roll attitude. Of course, a good number of the songs, especially towards the end of the album, also combine the two a bit more readily, which is even better.

I always worry about reviewing bands which are cult-classics, for fear of missing the point. Manilla Road seems to be no exception. Despite enjoying the album from start to finish, I still ponder that perhaps I still don't quite get it. I can see many good points, and it's a thoroughly enjoyable, dare I say, masterpiece of a record, but I certainly can't claim to know it in the same sense as a die-hard fan of the band would.