Absu are another band which I've been meaning to have a listen to for a long time, but nonetheless, I approached listening to to their most recent album, "Abzu", knowing only two things - that the band currently play black-thrash, and that I've often heard them compared to Skeletonwitch. Both of these things, it turns out, were fairly accurate. 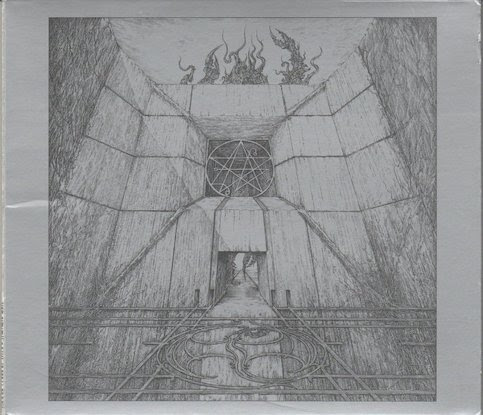 I had to listen to the first track, "Earth Ripper" twice immediately, before moving on to the rest of the album, just for it's mindbogglingly catchy intro, which initially made me thing that someone had uploaded some power metal to Youtube instead by mistake. After realising this was not the case, my initial observation is that Absu are a lot more on the thrash side than I anticipated. I definitely see more of the foretold Skeletonwitch resemblance than I expected too, with a similar vocal-style, tempo and tone throughout the album. Absu, however, are a bit more black metal influenced than Skeletonwitch, and there's a bit more in terms of sinister atmosphere and outright blast-beat driven ferocity. A lot of the songs generate their atmosphere from diabolical tremolos, but there are thrash riffs thrown in, with a rough, crunchy tone which, while less atmospheric, gives the songs some punch. The band definitely manage to capture the best of both worlds with this, with songs which are dark, and, my interpretation influenced by the artwork, almost Lovecraftian in their atmosphere, but also hard-hitting and memorable, especially the first track, which has a riff I may never forget.

The vocals have plenty of black-metal savagery and atmosphere, and very effectively work with the rest of the music - the vocals are very well incorporated. While mostly black-metal in persuasion, the thrash side of the band is revealed in the occasional high-pitched scream which, while rare, crops up once or twice through the album and really adds a bit of kick. One of the things which I was most interested to see was how the band reconciled the fourteen-minute behemoth of a track at the end of the album with the fast, short tracks which comprise the rest of it. It's not every day a band can do this well, especially with one track taking up literally almost half of the length of the album, however, I'm glad Absu have managed to do it well. The track is divided into complementing sections, six in total, which nicely highlight Absu's playing style, starting with an all-out atmospheric black-metal showcase of an intro, followed by bursting into an uncompromising thrashing section which is probably one of the most head-banging sections on the album. After this come a few sections which fit somewhere in-between, including a melancholy and goosebumps-inducing soft piece, followed ultimately by a reprise of the tracks intro. The transitions between the tracks are simple and are often just a half-second of silence, but personally, this didn't bother me much - the songs still works as one cohesive piece.


Black-thrash comes in various forms, varying from outrageously blasphemous to subtly arcane. Absu, with Abzu, have made a black-thrash album which is the latter. It's certainly "thinking-man's black-thrash", but sacrifices no energy in being so. The album ranges from ferocious to haunting, with plenty in-between, and feels like a solid, well rounded release.