Danish power-metal outfit Iron Fire are a band who have been immensely consistent since their return to making albums in 2006, releasing works of a similar style both quickly and efficiently. Voyage of the Damned is the first album Iron Fire have released since I discovered the band (shortly after the release of Metalmorphosized) and seems to be a change to the traditional formula, not least in terms of theme. 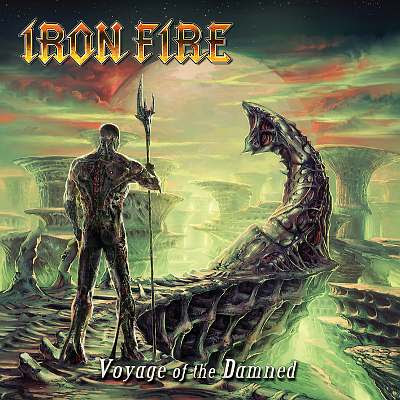 If you're familiar with the past works of Iron Fire, you'll know that the band tended, almost exclusively, to make material about knights, castles, questing heroes, and the similar themes which power-metal specialises in. This album, it is immediately apparent, is somewhat different - for one thing, it's set in space. The sci-fi nature of Voyage of the Damned signifies more than just a change in lyrical theme, but also in the band's music. While a lot of the familiar Iron Fire sound remains, the album certainly leans towards a new direction. Keyboards and synthesizers are a lot more present in this album than in any of the band's previous releases, and add a spacey sound to many of the songs, in contrast to the riffs, which are crunchy and memorable, in much the same style as what the band have released previously. The prominent keyboard use has the effect of making the album a little bit less rough and tough, and imbues the album with a heightened atmosphere, which is almost immediately noticeable. For all of it's aesthetic differences, however, the sound seems a rather superficial evolution, and the band isn't particularly far-departed from what they've always done - the prominent keyboard, slightly lower tempo, and lyrical differences are more-or-less the only things which set this album apart from it's predecessors.

I wouldn't go as far as to say that this is necessarily a bad thing, and if you come to this album expecting an Iron Fire album, that's almost exactly what you'll get. If, however, you expect a complete re-boot of the band's sound, you might be asking for a little much - the album is unmistakably still Iron Fire, but I hasten to add, it's quite a good one. While consistent, there are definitely ups and downs in Iron Fire's back-catalogue, and I'd say that this is definitely an up. The songs are solidly written, more so than on Metalmorphosized, and perhaps even up there with To the Grave, my all-time favourite. One of my favourite song after a few listens was "The Final Odyssey" which is a melancholy, wickedly-catchy keyboard-and-vocal piece, with no guitar work - this seems to be a sign that the band do possess a will to be creative and inventive, and certainly adds an unexpected track to the album - perhaps the defining feature of progression. "Ten Years in Space" also show this progression, but manages to combine it nicely with the familiar Iron Fire sound, with good balance, the sci-fi twist drawing the listener in, and the trusty guitar work and distinct Martin Steene vocals keeping you interested, but at the same time conserving the band's tried-and-tested sound.


Overall, the album is darker, and certainly less cheesy - Space is, if you'll pardon the horrendous pun, the thematic and lyrical final frontier of power-metal, and Iron fire are exploring it in this album. I'm interested to see where the band will go from here, and while To the Grave, I feel, will always be my favourite, this album is undeniably very strong, and has moments of epicness, beauty, and some great riffs.