I nearly went to see Altar of Plagues once, but I couldn't get into the venue for being under-eighteen at the time. I'm not dwelling on it. Honest. That's by the by though - "Mammal", going on album title alone, holds promise of something which is far from the traditional, occult strain of black-metal which I'm partial to, and the artwork further cements this likelihood. I wasn't mistaken. 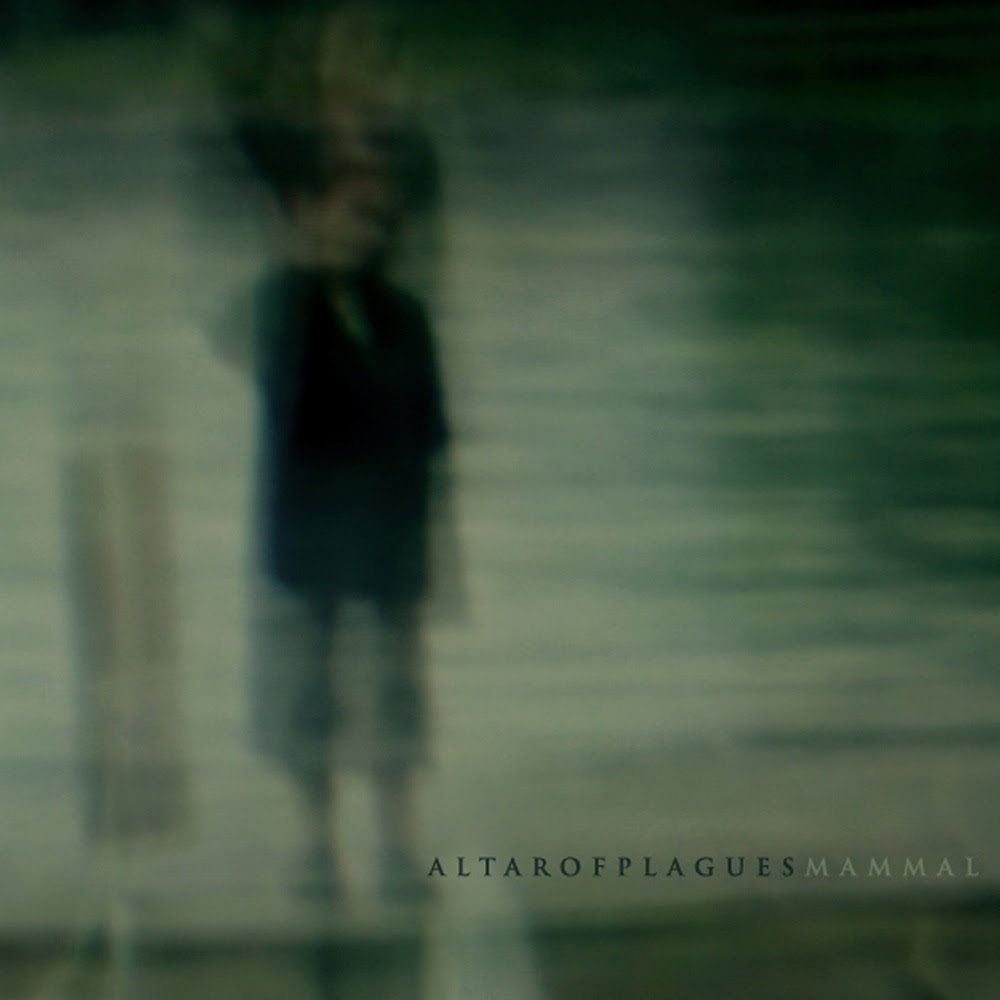 At fifty minutes long, but also only four tracks in length, Altar of Plagues definitely preach from the book of long songs. I don't entirely understand the form of "post" black metal, but I'm beginning to develop an ear for it, and it's present here. The soundscapes on the album are melancholy, with hypnotic song length and indeed instrumentation - the guitars lean much more towards a vast, muted and sad sound, with well-executed repetition, as opposed to any kind of black-metal onslaught - at the points in which the guitars do become faster and angrier, the sound is still that of a void, and even at their most intense, the songs sound, for want of better phrased synaesthesia, wide and haunted by feeling. The guitar sounds distinctly fuzzy and crunchy in these instances, almost as if it's peaking a bit, but this works well in the musical context, and really adds to the atmosphere. Talking of which, atmosphere is certainly something which the band have in plentiful supply, and I've not heard an atmosphere quite like it anywhere else - It's not as epic-sounding as some other bands with a post-rock influence, and it's not as cold and misanthropic as others. It sits somewhere in the middle, with a surreal and almost urban-sound, even before one leads the cryptic, poetic lyrics. I've certainly heard the band described as "Urban black-metal" and although I can't explain it, my ears certainly agree. The music seem very human, and as odd as it may be to say, has an oddly anthropological feel to it.

The bands appeal is certainly more down to the atmosphere and tone of their playing than from any degree of technical proficiency. The musicians are tight, and don't slip-up once in the entire album, but the playing isn't massively technically impressive. That, by no means, should be interpreted as me saying that it's bad. Far from it - but the enjoyable nature of the music is down to the atmosphere, tone and mood which the band conjure, and not due to any degree of flash musicianship. There is perhaps a little more going on the songs than could acceptably be called minimalistic, but its not far from it. This too, is not a bad thing - anyone who listens to this kind of thing knows the value of the music being hypnotic, and Altar of Plagues manage it really well. The songs have enough "action" to be scintillating, but also have parts which linger and let the listener wonder through a soundscape for a while. In a sense, I found myself not listening to the instruments as such, but to the atmosphere itself, and I hope I've not completely missed the point in doing so.


I've been meaning to listen to Alter of Plagues for an extremely long time, but this is just about the first time I've gotten around to doing it properly. I can safely say that the album is enjoyable - definitely the kind that need to be listened to, not simply played while you do something else. An engaging and somewhat mind-altering release.