Beyond the first three albums, I really don't know anything about Annihilator, but I do know that it was these three albums which cemented Annihilator's status as a well known thrash band. Never, Neverland is quite possible my favourite of the three, with Alice in Hell being a close second, and it took me a while to decide which one to review. 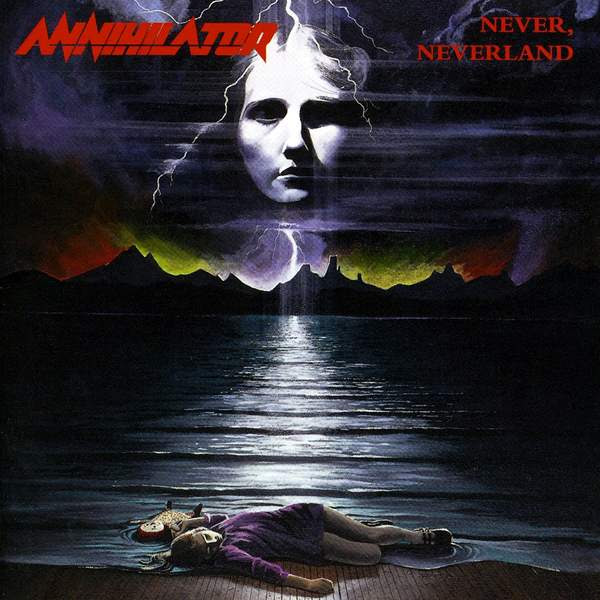 Annihilator's music has always only just qualified as thrash, and the first few albums hold this especially prominently. There is a lot more melody than what was going on in other thrash bands at the time, and the whole album is very much leaning towards speed-metal. There's little of the caustic aggression and frenzy which thrash brought to the table, and the sound is very refined and the songs soar, instead of rampaging, but that does not detract from the sound. Never, Neverland has a choice selection of fine riffs, which are memorable and almost immediately recognisable as Annihilator, such is the distinctness of their playing style. Annihilator plough through vocalists like a machine, and the vocals on this album are delivered by Coburn Pharr, whose performance is more melodic than that of "Randy Rampage" on Alice in Hell, but maintains a bit more anger than those on Set the World on Fire. The consequence of this is that Never, Neverland fits nicely into the middle-ground - the heavier parts are handled well, but the cleaner vocals, for example those on the album's magnificent title-track, also work nicely, with a melodic touch which helps the sinister atmosphere created to flow along nicely, in that track, and throughout the album, which courses through various moods from melancholy to sinister to uplifting.

The highlight of Annihilator, as can be expected, is the creative and unique guitar-work, which is what has allowed Jeff Waters to get away with  changing the band over the years to be a more "Jeff and the gang" affair than a conventionally organised band. There isn't a single song on the album which doesn't have something clever incorporated in it's guitar work, with riffs which sound fresh but oh-so-quintessential at the same time, and lead-work which is intricite, flawless, technically magnificent and most importantly, sounds very good. The lead-driven riff in the title-track, for instance, is one of the most memorable riffs I've ever heard, and it's quality certainly earns it it's catchiness. The lyrical themes are, as is often the case, surreal and somewhat bizarre - songs like "The Fun Palace" are twisted and psychological, whilst songs like "Road to Ruin" are more straight-forward, addressing drink-driving. "Kraf Dinner" is a song about macaroni cheese, which serves to remind us that thrash-metal isn't always a deadly-serious business. It's one of the heaviest songs on the album, to boot.


This is, undoubtedly, an album which I enjoy from start to finish, and it's the second of what many would consider Annihilator's classic albums. I can certainly hear it's "classic" appeal, in how well-rounded, filler-less and consistent it is from beginning to end. A true virtuosic thrash-metal extravaganza.