I very much like doom, even if it's not the subgenre I listen to most. In fact, I've not listened to any in a while, and as such, this album review should be nice and refreshing for me. Pilgram formed very recently - in 2010 to be exact, and the band have already released their debut full length album, in January, which is an impressively quick feat. The album has already gotten the band some attention worldwide, and I found out about them in Zero Tolerance magazine, where the catchy album title caught my eye. 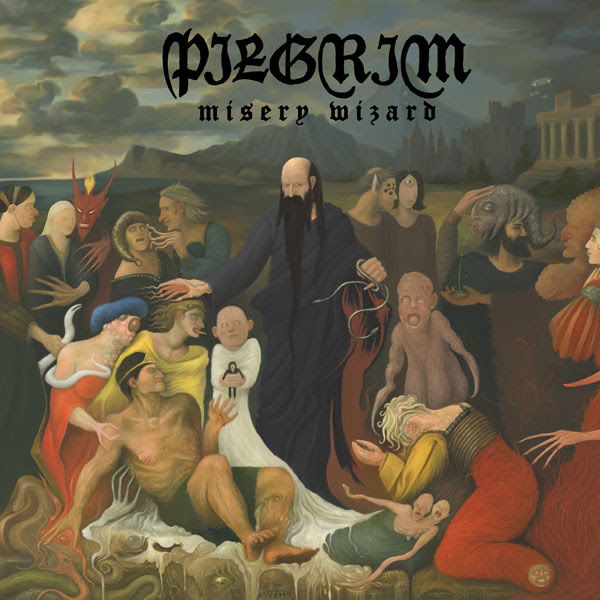 Suffice to say, the band have much more to offer than just a catchy album title. The music is the epitome of well-made doom, with the low-tempo crushing riffs really hitting the doom-receptor in the brain at just the right angle. If you're one of those madmen who seem to own dictionaries with pictures in them, the entry for doom-metal might well have a picture of Pilgrim somewhere near it. The riffs are very Sabbath-esque, with similar tone and a similar playing style in places, and plenty of string bending and hammer-ons. I've not listened to enough Reverend Bizarre to verify, but the consensus seems to be that they sound a lot like that, too. I can compare Pilgrim until the cows come home, of course, but the band stand very strongly on their own merit. The songwriting really is top notch, and while it's a very much established style, that doesn't detract from the fact that Pilgrim play it well - the album feels extremely well rounded from start to finish, and even the artwork and name have a very good feel to them, a robustness which the whole thing seems to exude.

The vocals come in the form of mid-to-high-pitched, slightly crazed sounding variety, which works well in the more conventional songs, but also adopts  a very evocative and grandiose feel when the songs soar into the neighbourhood of near epic-doom, for instance the third track, "Quest", which has many an epic melody, without losing the earthy charm through being too sharp and airy, the middle-ground working very nicely in this instance. The balance of the album as a whole seems to be a testament to the middle-ground too, with a good ratio of crushing, tooth-rattling slow sections to slightly faster, deliciously traditional riffs. The essential fuzz which accompanies the guitars is quite crisp and fresh, which means the songs aren't overwhelmingly murky, which is often something which gets in the way of me enjoying doom records. In Misery Wizard, fortunately,  can hear everything, very clearly. It's good to be able to enjoy every single explosive note played, every strike of the ride-cymbal, and such like, and the production and overall tone of the album really allows for this. At six-tracks and almost an hour in length, it's immediately clear that the songs are chiefly long, but they definitely do enough to justify their length. Standing out from the  long songs, the four-and-a-half minute long "Adventurer" delivers a surprise injection of tempo into the second half of the album, I can imagine it being a real foot-stomper live, and is definitely the unexpected but not unwelcome number on the album.

I'm not sure what the doom-metal scene is like nowadays, but it can only benefit from having a promising  band like Pilgrim in it. Especially with a debut like this. No filler, no weak-songs, simply six tracks of magnificent doom straight from some arcane studio of musical alchemy.