Overkill are, beyond all reasonable doubt, the veteran thrash band of veteran thrash bands - Forming back in the mists of 1980, and making albums with little interruption ever since. Feel the Fire is the bands debut full-length, and was released in 1985, which, aside from meaning that it has the "classic-thrash" seal of approval as standard, also means that it's a relatively late start, when combined with the bands formation, makes it something of a late starter. Arguably, good things are worth waiting for. 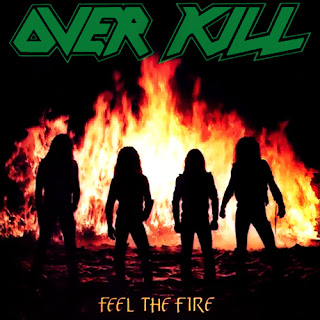 There are a couple of thrash albums which possess a certain feel - that of a band who were making such an album before anyone could quite agree on what thrash was. Most such albums are a little bit older than this one - Show no Mercy and Kill Em' All being prime examples. I'm tempted to say that Feel the Fire may well be one of the last thrash albums to have this style without it being a case of emulation. Enough about me describing it - I'd best elaborate. The "primitive" feel of the album is very pleasing, giving it a rough, vintage charm which pure, straight forward thrash albums don't always have. Overkill have, as far as I can tell, always been quite melodic as thrash bands go, and it's particularly apparent on this album, and the "not-quite-thrash-but-definitely-more-than-just-speed-metal" feel makes for a catchy and somewhat manic listen. Foreshadowing just about every album the band would make, Bobby Blitz' vocals are utterly thrash, and I'll argue quite openly that he has one of the best voices in thrash as a whole, with his quirky vocals and often extremely hook-laden lyrics making the songs memorable and above all quite fun. In Feel the Fire the vocals seem a little more sung than they would be later, which reinforces further the albums proto-thrash feel.

The drums are a bit off-time sometimes, and the production is a little bit minimal, but I didn't find either of these things to be  bothering me unduly. It just seems to fit.  The whole album has a bit of a rag-tag, "made-in-a-shed" production theme going on, which I feel is an aesthetic which thrash bands today really need to foster once again. The playing is far from seamless, but that itself has a raw appeal. Aside from the drums clattering a bit, it's a pretty tasty, if slightly rough production job. The signature overkill tone is already present in the guitars, even at this relatively early stage, and despite being a little different from quintessential Overkill, this album certainly showcases most of what the band would do for years to come, and do well at that. It may be a taste of what was, at the time, not quite fully ripened yet, but it's still a great listen and a true thrash essential.


Debuts can say a lot about a band. Cliched as it may sound, Feel the Fire is no exception to this. The unique and thoroughly enjoyable Overkill aesthetic is immediately and utterly apparent. It's difficult to convey what the music tells me but this album... It's Overkill, no doubt about that.

This is a 9/10. I need to be more mean. Perhaps if I didn't review stuff I already bloody like most of the time...