Kind Diamond is a good example of a band which is essentially the solo project of an established musician, but has, with time, outgrown the band which the musician initially came from. Mercyful Fate were, without question, a hugely significant outfit, but with the release of albums like "Abigail", King Diamond have certainly gained a great following of their own, and upon listening to the aforementioned album, I seek to find out why this is. 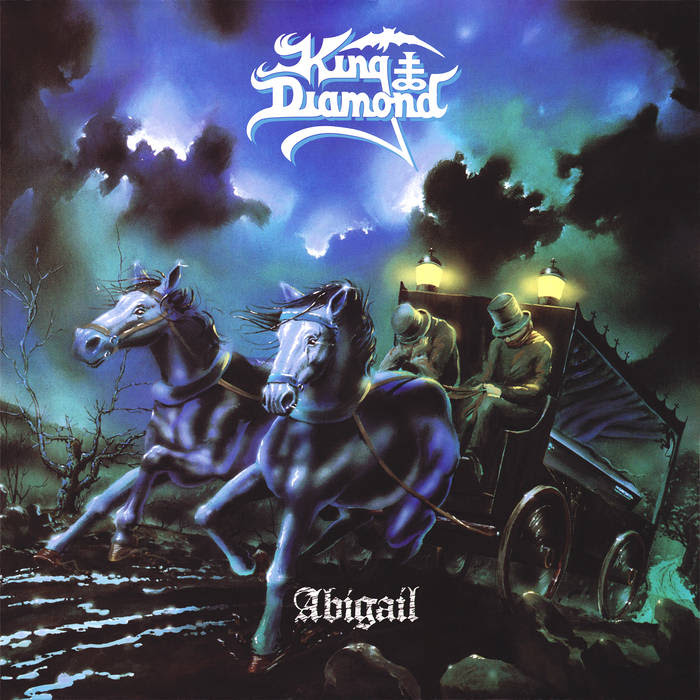 Metal Archives is not gospel truth on all matters, and many people will happily argue that. But when an album has been reviewed by thirteen people, and the average score is still 96%, you can usually tell that an album is going to be a force to be reckoned with. I struggle to pinpoint King Diamond in the grand scheme of things, so describing the sound as traditional metal with a sinister edge is probably the best I can do. I've not listened to anything like enough King Diamond in the past, and I can admit that it took me a long time to work out where the appeal was. I think, perhaps, this was because I was trying to look at it as something other than traditional-metal. The band is more diverse in sound than I expected, and seems to be quite comfortable to innovate. Songs like "A Mansion in Darkness" are a lot bolder and more intense than a lot of the other traditional metal from the time, and the guitar work is very distinct, with the unforgettable intro-riff which is... difficult to describe, but really evokes the horror atmosphere which the band were no doubt aiming for. I'm not sure what clicked to make me suddenly really enjoy the music, but I can safely say that something has, and the songs seem to appear in a new, refreshed light.

As ever, King Diamond's vocals are at a helium-pitch, and drive the songs along magnificently, with rocking, memorable choruses and vocal hooks to challenge any vocalist of the style. The songs are, overall, definitely more catchy than I gave them credit for, and the riffs and vocals definitely contribute to that. The lead guitar is really prominent too, with at least a couple of solos per song, and some marvellous hooks and embellishments added here and there. The production is really tight, just about perfect in every conceivable way, and the tone, which I mention in just about every single bloody review I do, is top notch. I'll also add my usual of saying that the album feels "very complete" - It does - There's no filler, and all of the songs are good enough to be a single from the album. The songs are really diverse - there are speedy songs, attitude driven rocking-out songs, and epic anthems such as "The Family Ghost". The album really does have a little bit of everything - It's practically a well-assembled showcase of what traditional metal can do, and that can only sound tasty as hell.


I can truly comprehend why this is a classic album now, and not only that, I can also see that it's utterly timeless. There's not really much more for me to say, other than, if you've not listened to this album, it'd probably be very good for you to do so.