#141 Percht - The Aftermath of a Velvet Season

Something undeniably a little more on the obscure side now, Percht is a band I ran into on the Metal Archives forum a day or two ago. I've not listened to as much non-standard black metal as I should have over the years, and quite a portion of the epic/ambient/post/generally fancy subgenres are something of a mystery to me. Probably to my detriment, I'm not one to let a complete lack of knowledge about something get in the way of me reviewing it. 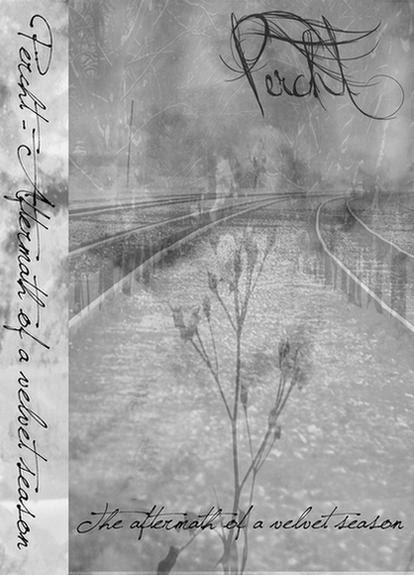 As is often my persuasion, I'll convert my impression of the band into a tactile one. This band is definitely silky, velvety, and the album is altogether befitting of it's title; "The Aftermath of a Velvet Season". The music is melancholic and yet also euphoric, with a mixture of sadness and joy which is rather unfathomable but thoroughly fabulous to listen to. The tremolos which make up a lot of the guitar work on the album dance very elegantly, with non-sinister scales and epic, warm, and golden-sunlit vibes being given off. The tremolos benefit from a "two-level" sound which the music seems to hold - The bass, or at least, the lower elements are very audible in the mix, and really adds depth to the music - especially in the clean-vocal sections, of which most songs have at least a couple - It's like hearing a whole different dimension of sound, and I don't exaggerate in saying that it's extensively pleasing to the ear. I've not listened to a great deal of black metal in this atmospheric style, and I don't know if I'd trust my own judgement in saying that this sounds unique if the general consensus didn't seem to agree with such a statement.

The major strong point of  strong points for this album, and indeed all of the songs which the project creates, are the murmuring, beautiful clean-vocal sections. With a singing voice which sounds like something between Quorthon and the soft vocals of Grutle Kjellson of Enslaved, in many places, consequently, there is a touch of the Viking about the music. It's certainly got a mountainous epic feel to it, but at the same time, the music manages to conjure a soft, multi-dimensional pocket of sound which is contrastingly intense and lullaby-like. I've never been entirely sure how uniqueness ties in with music simply sounding good, and I expect it would take someone much wiser to think about that, so I'm unsure if the uniqueness of the music is related in any way to the fact that it's excellent. Perhaps Ferre, the man behind the project is simply good at what he does, and what he does happens also to be refreshingly original in a good number of ways as well. Whatever is is, I enjoyed every single track on the album. I tend to enjoy bands which combine a bit of everything, and if you listen youself, I'm sure it's easy enough to pick up on the fact that this band is one of those.


I'm very pleased to have happened upon this music, and a definite thanks to the metal archives user "Stormm", who made the thread about Percht, thus helping me discover some damn fine music. I'm delighted at what I'm listening to. It ticks so many boxes - Percht make beauty the way I like it; Shimmering, echoing and above all un-cliched.

A definite and well-deserved 9/10.