Von are the second in my somewhat arbitrary trio of bands which are widely held as being among the cult artists of the low-fi black/death/war metal world. If I could put a better phrase on it, I would, but my knowledge of the particular school of extreme metal which such bands come from is sadly limited. But that's by the by. To get to the point, Von released the "Satanic Blood" demo back in 1992, and many would herald it some of the first "true" black-metal from the United States. 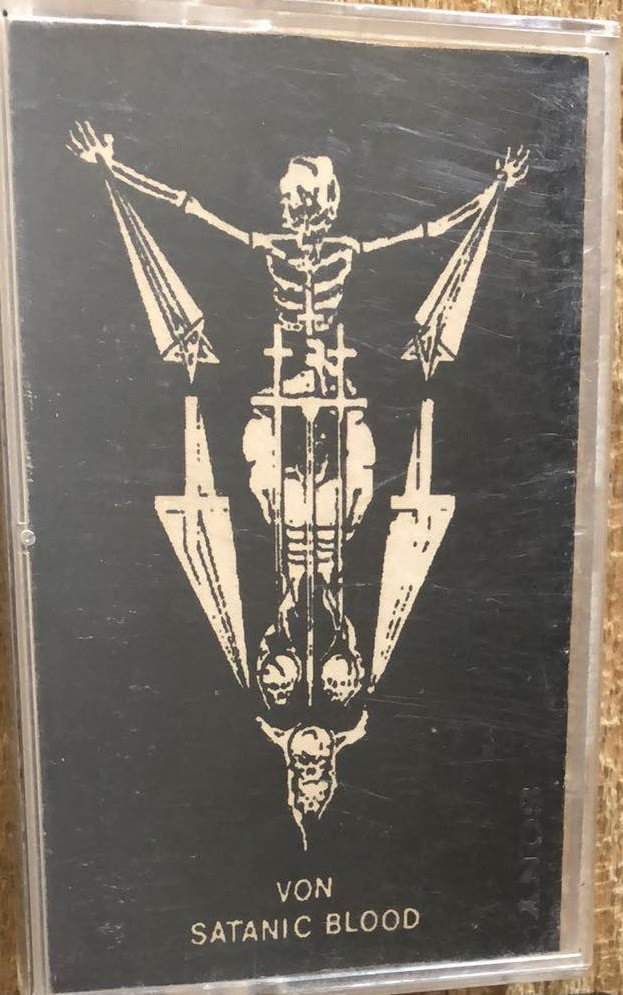 As a record, Satanic Blood takes a while to get started. The first two songs, "Devil Pig" and "Veinen" really showcase the bands horrific drum sound. It's a given that the style of music which Von represent are meant to sound a low-fi, but sometimes it seems to go a little far - The first two songs, in addition to blending into each other, also sound like the percussion is provided by a man hitting a plastic biscuit-tin with a spoon. This fact had often deterred me from listening to the band much, and when I put in the effort to listen to the whole thing, I was very pleasantly surprised that after the initial misfire, the remaining songs are actually quite enjoyable, not only does the sound get better, but the songs become memorable, for example "Satanic Blood" and "Veadtuck" are well-executed creepy black-metal in style, and have a sinister sound not quite replicated outside of Von.

The vocals, like those of Blasphemy, aren't really those of a stereotypical black-metal band, and existing before black-metal had any conventions in terms of style, this is no suprise. Interestingly, the vocals Von do utilitsestill possess an atmospheric, as opposed to brutal, harshness. One reason, for this, no doubt, is their near heroic levels of reverb, which give the band a very unnatural sound, boosting, as opposed to hindering their eerie, satanic sound. The bands whole aesthetic, both in terms of sound and appearence seems to have this quality; scary not so much in the sense of the devil himself rising from the pit in a fit of misanthropy, as is invoked by some black-metal, but more subtle than that; An ancient, unexplained tablet depicting such an event, with a dark, evil aura. Von's demo is definitely the sort of thing that will greatly alarm someone searching through an old box of music in an attic in about a centuries time.


I've come to admire Von for managing to be scary through different channels to black-metal's typical approach. While the album is heavy, by anyones standards, it's not that which makes it sinister, even to the hardened extreme-metal listener. It's how very arcane, and almost supernatural it's prescence feels, the sheer kvltness eminating from it perhaps. Whatever the answer is, it's a damn fine piece of work.

I'm going to give "Satanic Blood" 8/10, drawing it level with "Fallen Angel of Doom"