Punk isn't a genre I've delved anything like deeply enough into, which is odd, because when combined with metal - and often when it's not - I thoroughly enjoy it. "Forward into Battle" is definitely of the former school, and combines punk rock with thrashy, speedy influences. I'd not heard the band before, but I can safely say I'll be hearing more of them now. 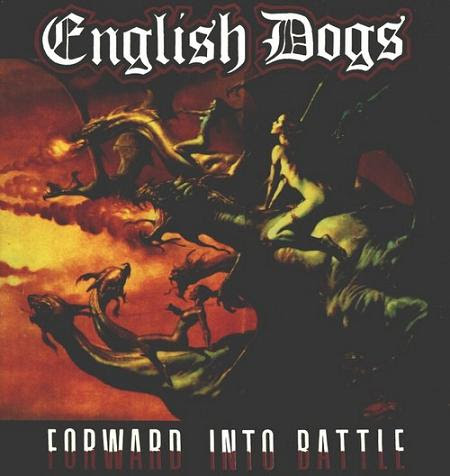 My description of the band, perhaps a testament to my limited knowledge, is that of a band which sounds like an older, wiser Toxic Holocaust, and sounds a damn-sight more punk. Released back in 1985, this album was a very thrashy affair for a time in which thrash was only a juvenile style of metal, and the band seem to reflect the injection of punk with which thrash was boosted to uniqueness. The style which English Dogs seem to have brewed is outstanding - It's got a strong punk and speed metal prescience, which mixes with the thrash to make it snotty, catchy and altogether interesting - something shared by bands like Venom, albeit less technically and tightly, compared to this band, who carry-off plenty of lead, diverse song structures and a generally noteworthy level of technicality, impressively breaking the stereotype of punk musicianship. I know that metal and punk are mixed together with great frequency, but I've not often heard it mixed at the ratios which English Dogs do - It's not quite thrash enough to be crossover, perhaps, and not punk enough to be punk-rock, but somewhere in the middle, and a rather excellent sounding middle it is too - It's almost impossible to put on a two directional spectrum, perhaps if one was to smash together Iron Maiden, Venom and very early thrash, then spun them in a centrifuge for quite some time, you could get something similar, but there is really no way of putting it properly - listen for yourselves.

The production pleases me a lot too - It's mixed to the point that everything is audible, and the levels are about right, but it's got a wonderful clunkiness to it. There's a lot of organic feel to it, and it's certainly not enhanced excessively post-recording, which, when done well - like this - is something that I seldom fail to enjoy. The production compliments the albums sound nicely, and really sets a "scene" for their neish in metal.


I have a vague instinct when it comes to finding bands which I've not heard before. I can usually tell which ones will grab my vague interest, and above that, I can tell which ones will become highly incorporated into my every-day listening. I can happily say that this band is definitely one of the latter.