This review is the first in what I've decided to be a trio of reviews focusing on bestial, low-fi death/black metal - Expect reviews of Von and Archgoat in the coming days.

Many a kvlt gentleman have I encountered who responds to the name "Blasphemy" with great approval, and they're definitely high on, pardon the pun, extreme metal's "cult classics" list. Being one of those bands, like Von, who do an interesting style of lo-fi death-metal, almost approaching black-metal, the "Fallen Angel of Doom" album wasn't a crystal clear listen, but it was nonetheless satisfying. 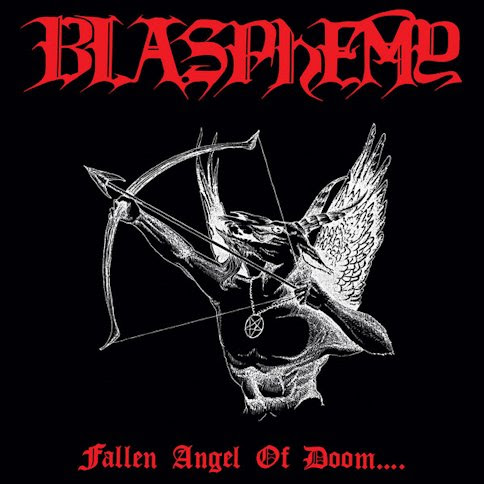 I'd not listened to much Blasphemy before this, but the low-fi and minimalist production came as no surprise at all - The aesthetic, of red and black, which, in this context, as far as I can tell, was essentially spawned by bands of this persuasion, certainly hints of it, and that's before their musical context makes their style all too clear. Unlike just about everything I usually listen to, this album is very much driven both by the drums and guitar, which seem to be given more standing in the mix compared to the guitar and bass sound, which immediately reminded me of Von, who go down a similar path. If anything, however this stuff is a bit better produced, and certainly benefits from it. The vocals are very much on the death-metal end of the slider, but nonetheless sound quite eerie, like some hideous resurrected lich, which definitely makes the sound more evil and occult. The guiars follow on with this theme - the solos are chaotic, but come with a dark, spine-tingling edge of discord and evil, and the rhythm-work has the slightly repetitive edge which black-metal is so often equipped with.

Despite being released a while before black-metal became a true subgenre, you can definitely hear it in a proto-state in a lot of the songs on the record - especially "Goddess of Perversity" which immediately made my black-metal sense wake up a bit. The devilish sounding intro, coupled with the general evil riffing and vocals on the track certainly are situated in a no man's land, which, at the time, few bands had ventured into. I don't know how aware Blasphemy and Von were of the Norwegian scene which began a few years later, and indeed vice-versa, but I'd certainly venture that the north-American bands have as much right to the claim to be among the originators of the style as the European bands do. Fathering a different school of the style, of course, one which is much more bestial and dessicated than conventional black metal, Blasphemy certainly took extreme music to a new level, and it's still unparallelled in a certain kind of heaviness, which I can't quite put my finger on. Suffice to say, Blasphemy impress me with their unrefined brutality, which manages nicely not to be cliche, or indeed foolishly over-the-top.


I tried to listen to Blasphemy maybe a year or so ago, and I couldn't get into them at all. However, there are certainly bands which I hear in that way, and somehow know that a time will come when I will get into them. Blasphemy are one such band, and no doubt, in light of this strategic expansion of taste, more of a similar vein shall follow.