I spoke in my Exodus review about inadvertently not reviewing some of the most influential and important thrash bands. If neglecting exodus was criminal, then I can safely say the neglecting Slayer has been somewhat akin to treason. To amend this travesty, I now shall proceed to take a good look at the elephant in the room, that nobody noticed. 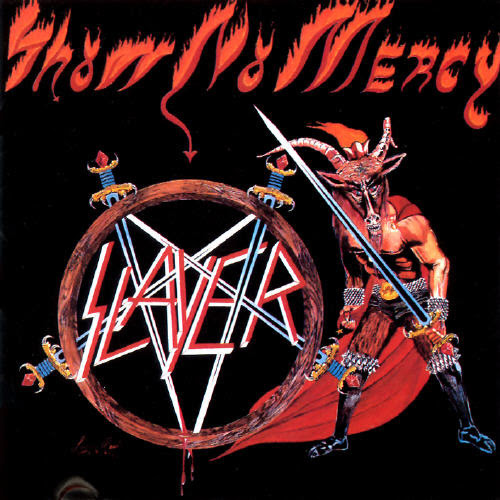 I don't actually listen to a terrific amount of Slayer, despite enjoying them when I do. "Show No Mercy" is probably one of my favourite albums by the band, and certainly one of the few I've lent my ear to, to any extent. I always enjoyed the NWOBHM influence on the band's early sound, and on this album it's very apparent in the song style. In this respect Slayer go down the path of sounding like a somewhat more thrash, slightly more technical version of Venom, combined with, of course, their own unique character. When I discovered that Slayer opened for Venom, in the early days, I was not surprised, and it was this that first lead me to compare the two bands. Of course, this isn't to say that Slayer don't have their distinct charm, with the unmistakable tone and style which would later come into it's own, and change the world of thrash forever. However, the "proto-Slayer" sound in this album is laden with charm; The more traditional style rhythms and drumbeats give it a much more jumpy impact, and the album doesn't bludgeon in quite the way that behemoths like "Reign in Blood" do, but the songs are still equipped with that signature sinister dark tone, which is what makes the band stand out, even today.

It interests me to imagine just how refreshingly new Slayer must have sounded around this time - Thrash wasn't really born in 1983, but here they were, playing a thrash of which almost no other 1983 thrash album matched, and while heavily influenced by more traditional metal styles, the album is, undeniably, a true thrash album, albeit not as intense as what was yet to come. Nonetheless, I find "Show No Mercy" to possess a very amiable collection of attributes - On top of being a monumentally significant début, I love the production, right down to the artwork - in terms of sound, the album is produced in nice, clunky fashion, but has a well-rounded edge. I'd go as far as to say that aside from the vocals often being mixed a bit low, the production is almost exactly as thrash-metal should be, and certainly, in my opinion, is one of the styles which showcases thrash the best.


This overall iconic album certainly lives up to it's legacy - while Slayer, of course, went on to heavier things, this album still has something, to me at least, that the others don't hold in such profusion. I certainly like most of Slayers discography, in one way or another, but this album is certainly the one which I love.