Well, there was definitely something of a lull in my output of reviews over the drinki... I mean... festive season, but hopefully now I can get back to writing them every couple of days. Yestarday, I sat, and noticed "Damn, I've never reviewed an Exodus album!" Remain calm, this shall now be ammended. 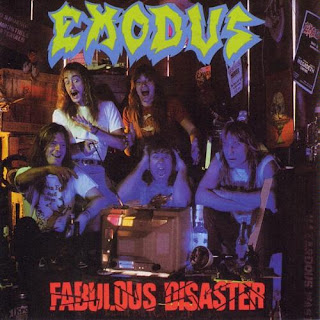 There is no deep, profound reason for me not to have reviewed the band in the past, I merely forgot. But this cornerstone of Bay-area thrash cannot be forgotten forever. I've not listened to enough Exodus, I feel, but I admire most of what they've done for thrash - For being an album released in the misty eons of slightly muddy production in thrash as a whole, the album sounds damn tight, and has a nice sharpness which many of it's peers lacked, Master of Puppets, for instance, is almost unlistenable to me at the moment on account of it's sheer murky sound, in which everything is slightly too lost to enjoy. Musically, Fabulous Disaster is a sturdy metal steed, with thrash of  the quintessentially 80's, harsh, but also catchy style. Toxic Waltz is a prime example of this - the song is not going to leave my head for a long time, and when it does, I can guarantee that there will be an "instant replay" button present. The overall lesson that the album teaches with songs like this is that thrash, damn, heavy metal in general, is perfectly allowed to be fun.

Another observation is that you simply don't get thrash which is quite as catchy as this now-a-days. Although a change from the comparatively more intense attack of earlier material like "Bonded by Blood", this album makes up for it with the aforementioned catchiness. On almost all levels, the album is exactly what the doctor ordered - It's a good medium. Most of the songs, it is safe to say, won't evoke strong feelings of wonder, inspiration or the like, but they're quite exceptionally fun to listen to, and that's what thrash is actually about, in it's pure state. The album seems to be a peak album, with any filler having been thrown in a sack and thrown in the San Francisco bay. Each song is strong on it's own merits, and they merge together to forge a deeply enjoyable, memorable and  quirky album.


Old albums, which have stood the test of time, often sound high quality. This, of course, is often due to the fact that they've been around for quite some time, and a lot of the opposition has faded into obscurity. I'd like to think, however, that Fabulous Disaster is the kind of album which I would enjoy whatever it's age. I'd not listened to it often before now, but I'm pretty certain that's going to change.