#088 Nethervoid - In Swarms of Godless Wrath

Intense, wrath-filled and overtly occult related black-metal. Where in the world could have spawned such a band, I thought to myself. Somewhere cold and dark, heavily forested perhaps? No. Nethervoid hail from Iowa, in the USA, and in their second full-length album, "In Swarms of Godless Wrath", they demonstrate that Iowa does indeed have good music to offer. 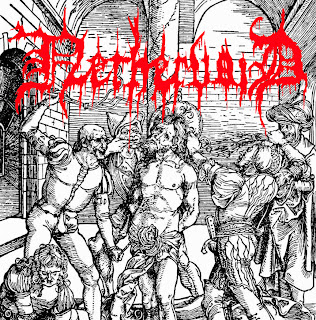 Nethervoid produce a traditional sounding black-metal offering, with a good balance of speed and dark atmosphere, which is very well captured indeed. The songs have a bit of variety to them too, as opposed to all being of the exact same style, which is something of a problem in a lot of black metal. The albums fast paced too, a mere thirty-five minutes in length, and flew past at great speed - I was at track-five before I could blink. This might suggest that the songs run into each other a little bit, but they've got a certain distinction, each one having a scattering of uniqueness within it, keeping the album exciting from start to finish. The album is endowed with a very mature feel, and despite the band having only released one album and one EP previous to this, it sounds extremely solidly formed and indicative of a band who have found a definite direction, and some real darkness - the "Iowa Black Mass" intro track really sets the occult, dark theme for the whole album rather nicely.

The albums tone as a whole is nicely prescribed by the guitars and vocals. The guitar sound is atmospheric, but possesses a bit of crunch with it, giving the music energy, not being excessively raw, but also retaining the dark, evil and bestial quality of the music. The vocals are impressive too, a very demonic sounding thing, somewhere between a shriek and a rasp, which makes the band stand out a bit, as, although the style is used in black metal, it's one of the less used styles. The drums are tolerable, and, although I'm reasonably positive that they're provided by a drum machine, the production does a good job of making it feel quite organic, and, despite my usual allergic reaction to drum machines, I only felt ill during a few blastbeat sections, where the timing was a little too perfect to sound good, although I can happily say that that's my only complaint from an otherwise excellent album.

To conclude, I'm rather glad that I encountered Nethervoid, on one of my spontaneous rummages through Bandcamp. If the band continue to make albums like this one, then I'm confident that they could become a very successful black-metal act, and I look forward to that time.