Embers are one of those bands which I discovered completely on a whim, once again, while trawling through bandcamp looking for things to listen to. I'm not the best genre-classifier in the world, by a long stretch, but the EP seems to be comprised of doomy songs, with perhaps some black-metal influence, and some synth thrown in along the way, all of it too good effect. 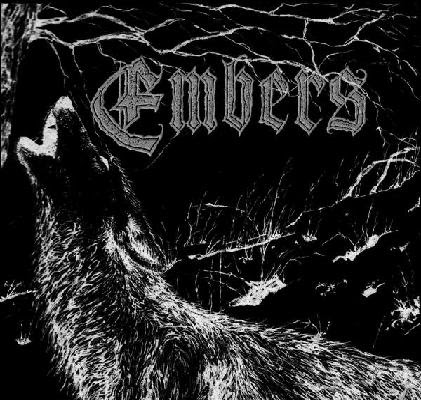 As soon as I began to listen to the EP, I could immediately tell that it was going to be a little different to anything which I'd encountered before, and I can happily say that I was right. Embers have an interesting "symphonic crust-punk" sound going on, with black metal/punk hybrid riffage, synergised with synth (or what I might be foolishly presuming to be synth), and doom metal tendencies, which, although an odd sounding combination on paper perhaps, works extremely well, creating remarkably beautiful music, with a harsh edge which nonetheless blends well. The vocals are a black-metal staple, harsh and sinister, but also add to the styles beauty and fascinating crossover of stylistic influences. One of the notable advantages of a band who incorporate a bit of everything in their style is that, in my case anyway, they hit all of the right buttons with my musical taste. Epic, dark, energetic, intense, the band seem to manage to evoke it all, and I can safely say that there is practically  more than one atmosphere at once half the time, leaving the feeling the music gives almost up to personal choice of the moment.

Perhaps the band strikes such a chord with my taste because what they're making is quite close to the music I aspire to make myself, but I'm certain that the band would appeal to just about anyone into black metal, or extreme metal in general. It's odd for a band to combine symphonic beauty with the attitude and snot of punk-influence, but Embers seem to pull it of extremely well. It's not the kind of music you just listen to a couple of times, either, it's the kind of album which has a lot of replay value, and I, for one feel like I may well be listening to this compact, complete sounding EP numerous times in future. Sometimes you'll encounter an artist or sound that just possesses a certain enjoyable charm, and I think I can safely say that Embers are one of these - I'm astonished that they're not better known.

I can safely say that this is one of the bands I have randomly discovered which will stay in my musical circulation for quite some time, and, when I get around to listening to their full length, later on, I hope it holds just as much charm, beauty, and most of all the same excellently high "listenability" which this EP had.

Links:
Embers on Bandcamp (with free download)
Embers on Myspace
Embers on Metal-Archives