Skeletonwitch return with album number three, (or four, depending if you count their long out-of-print debut) Forever Abomination. I've always considered Skeletonwitch to be quite an interesting band, and it's reasonable to state that there are few bands anything like them. The new album carries on the aesthetic and sonic signature style of the band, with a few tweaks here and there. 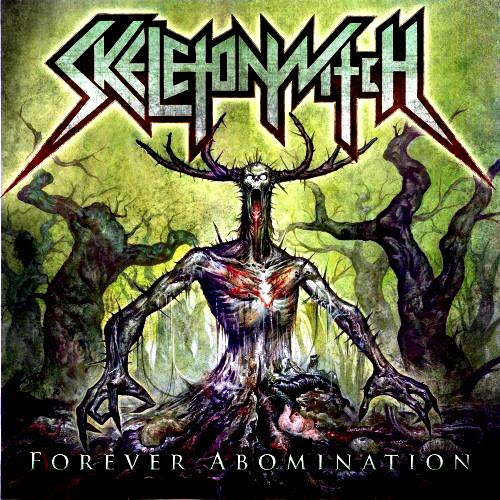 Skeletonwitch have always played a tight, elaborate style of black-thrash, and this album is no exception - indeed, it seems to have been refined even further than in their previous efforts. It's still full, if not more so with this release, of the little twists and turns which make the band so distinct, with the lead work especially having a very interesting, surprisingly clean tone in the release. The rhythm guitar is very chunky and crunchy, too, which helps to capture the increased quantity of relatively riffy, thrash orientated material, which is executed in a solid sounding, and pleasing way. This gives the band's sound the boost in strength which it needed, finally giving Skeletonwitch some power above and beyond that conjured by their speed and harshness. The albums also a step up in terms of being memorable, with sections sticking in the mind from the very first listen onwards.

One thing I very much admire about Skeletonwitch is that they aren't afraid to do things which other thrash bands might be nervous to attempt - the band do for thrash what Baroness do for sludge-metal, with songs like "The Infernal Resurrection" having an almost pop-music catchiness and twisted-cheeriness, especially in the intro. Skeletonwitch are the sort of band who manage to make things like that work, seamlessly. This album has a sheer maturity about it which the band haven't managed to reach before, and every characteristic of their sound seems to hint at it. Although the bands sound is consistent, it's becoming a better and better version of itself, to the point of being noticeably different to their earlier work. This album seems to suggest a band soaring high, in the peak of their performance, and is a milestone on the band's journey from little-known to highly acclaimed.


I'm tempted to consider this the bands best album yet - It's certainly a strong piece of work, both in terms of skilled playing, good songwriting, and nice production, which is the icing on the cake. The album is the third in a chain of what are, by any standard, remarkably good records.