Okay, I'll admit that I was a little bit cheeky - I downloaded the leak of the album a couple of days ago. The fact that I've also pre-ordered it, on the other hand, balances it nicely, so I feel no qualms about reviewing this album a little while before it's officially released. Dystopia is the tenth studio album by the band, and their first with new vocalist Stu Block - after a few albums generally considered to be sub-par, I've been awaiting dystopia with bated breath. 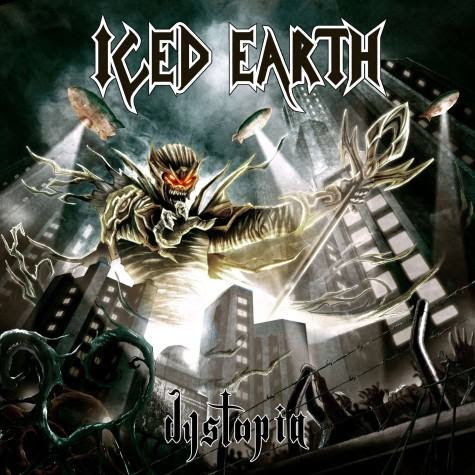 I think I can safely establish, from the very beginning, that Dystopia is a large cut above many of the bands recent works, and possesses a fire, and, most importantly, a complete feel which the last few albums sorely lacked. Each song stands up well on it's own, and although the album has a theme, it's not a concept album, which is a good change. This album is pleasantly closer to thee "classic" albums, such as Something Wicked, and Horror Show, which seems a pleasing development. After a few albums of rather weak riffs, Dystopia is a veritable riff-fest, and it's a reminder that Jon Schaffer is an extremely competent rhythm guitarist. The vocals are rejuvenated too, with Stu Block delivering a talented vocal delivery - sounding like both Barlow and Ripper Owens, but also being distinct in his own right, and easily as versatile at the others - crushing baritone vocals, deadly falsettos, and even the occasional growled vocal, such as the opening vocal of the opening track, which proclaims the album with great power and strength.
One of the things which has been proclaimed by Jon Shaffer about the album is going to be less elaborate than some of the previous efforts - focused a lot on heaviness and intensity. This is definitely true - Iced earth haven't made a song which could inspire a mosh in a couple of albums, but some on this album undoubtedly can; songs like "Boiling Point" are a thousand-mile-an hour return to the bands thrashy roots, but are also reminiscent of tracks such as "Stand Alone" from Something Wicked. The album gets a good balance of tempos and styles too - there are songs all the way from ballad to blisteringly fast, and almost all of them feel relatively complete, and are well written, beyond a doubt. Just about everything which is roughly associated  with Iced Earth's sound is present in some form or other, making the album well rounded as well as well written. It's not fantastically progressed, or evolved, from the bands traditional sound, but it is using that sound in the best way that it's been used in a long time, and it has changed a little - there are things I haven't heard the band do before, scattered here and there, like gems.
I'm thoroughly pleased with Dystopia, I must admit. I'd lost quite a bit of my faith in the band, but this album has rekindled it and more - Before,  thought that Iced Earth were perhaps past their best, but now, I'm not so sure. If the band keep momentum, I expect great things once again.The album's a comeback, and they never went too far in the first place, lets face it, they've never done a collaboration with Lou Reed.
I give Dystopia 9/10.
Links:
Iced Earth Official Site
Iced Earth on Myspace
Iced Earth on Facebook
Iced Earth on Metal Archives.