Cathedral, formed by ex-Napalm Death vocalist Lee Dorrian, have been a British doom/stoner metal mainstay for a long, long time. The VIIth Coming represents the bands later material - taking a lot of influence from stoner-metal, and less from the doom metal which was the bands initial style. 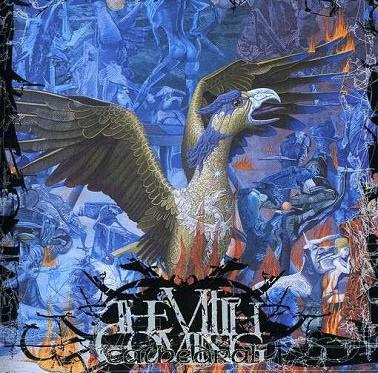 Of the multitude of bands which fuse stoner and doom metal, Cathedral are quite high on the list of "bands which do it well". The stoner influence creates a telltale massive lower-end, but combines it with, often, the crushing chord-driven attack of doom metal. The band are in the middle in terms of heaviness, too - a lot of the doom metal I've been listening to has either been very epic, or harsh, but Cathedral take the middle-ground, and do so rather well, brimming with attitude, which is boosted further by the remnants of a punk-style in Dorrian's vocals, but also with a lot of beauty throughout the album, no doubt borne from the doom metal element in the music. Pleasingly, the album as a whole has a diverse and enjoyable range of musical styles within it, with some tracks having a lot of groove, others an epic feel, and some feeling rather punk in their edge.

Throughout all of the songs, there seems to be a fantastic synergy between the instruments, and the sound seems organic and honest, with the sounds mixing, as opposed to simply being superimposed upon one another, in a very sterile fashion. The album also has a lot of replayability, as should be apparent to the listener, there is a hell of a lot going on in most of the songs, unquestionably much more so than can be taken in in a single listen to the album - I got a copy of the album over a month ago, and I'm still picking up on bits I haven't appreciated before, like some marvelous sonic buffet. There's a lot of heaviness, in that quintessential doom/stoner way, and while a lot of extreme-metal subgenres sound "heavier", This album has a very wholesome, honest, and bass driven kind of heaviness, which is equally pleasing to the ear.


The VIIth Coming is an enjoyable album from start to finish, and if I didn't feel ill today, I'd have liked to go into more depths about what I like about it - take it from my common-cold addled brain, however, it's a mighty fine listen.