Attracted by the lovely cover art, the desire to expand my musical taste, and the imminent opportunity to see them live in a few days, I've promptly decided to lend a thorough ear to the stoner/doom act Yob. More specifically, their sixth full-length album; Atma, which came out a couple of months ago. Now, that really is lovely artwork, don't you agree? 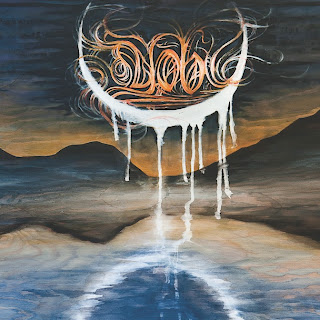 Yob give one of the more crushing doom metal onslaughts I've heard in recent months, and I'll wager that the stoner metal element adds to that considerably. While at a consistently low tempo, the riffage through out the whole album is immense, monstrous, and the low end would shake the walls with relative ease, in a plodding, but very enjoyable manner. The vocals seem quite diverse, with the first track having an almost traditional-metal, sneering, high pitched delivery, juxtaposed with the second, which has very harsh, growled vocal approaches, or the third, which is somewhere in between. The vocal variation seems to add a lot to the music, and at any point during listening that I zoned out a little (which is one of doom metal's attractions, from a non-analytical point of view) the vocal twists and turns restored and maintained my focus. The entire aesthetic of the album works in this way, that said - It's one of those albums which feels like a musical journey, an experience, as opposed to a collection of individual songs.

The production's a bit fuzzy, but the sheer extremity of the overdriven guitars, and the low-end are more complimented than jarred with this; The production is definitely just about perfect for the bands sound, murky and crushing, but not without a little essential treble to give the music plenty of power, although I'd be inclined to say that, in terms of sheer sonic power, Yob are easily up there with the most intense doom acts of today, although the heaviness is nicely combined with an unconventional sense of beauty, which, although not "epic", is certainly haunting, and posesses a shimmering wonder which is quite difficult to qualitize - listen to the album, perhaps, and you'll know where I'm coming from.


I can't claim to have been into the band for a long time - about a week, since seeing their name on a poster, to be precise, but I certainly enjoyed listening to this album, and am curious to lend my ear to their other material, which I hope is equally enjoyable. The band exceeded my expectations, I can happily profess.

Links:
Yob on Myspace
Yob on Facebook
Yob on Metal-Archives