Evile, it must be said, are doing rather well, and have been for some time. Both of their albums were well received by thrash-fans world-wide, and the expectations for this, their third album, are high. It pleased me upon listening, to discover that the band certainly haven't lost momentum yet, not slowed down, and not lost their thrash roots. What pleased me even more was to discover that they've improved, and are well on their was to having a noticeable sound, as opposed to being a little on the generic side, which their earlier material was. 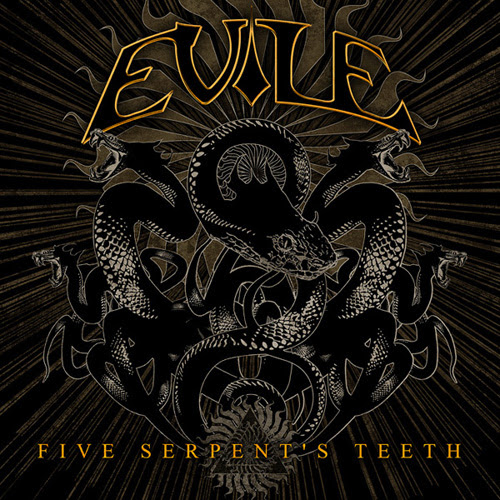 One of the things which I struggle with, when it comes to Evile, used to be finding any of the songs particularly memorable. Not any longer - Evile have really upped the catchiness of their songs on this record, with most of the songs being at least a little distinct. Lyrically, the album has some excellent hooks, and the vocals have improved quite a bit, and although sounding a little overproduced in places, are overall quite pleasing, and certainly complete the structure which the guitars, bass and drums had already began to construct on previous albums. I've always considered the third album to be the beginning of a bands maturity, and Five Serpent's Teeth certainly sounds that way, being more diverse, distinct and possessing a confident edge, moreso than any of the bands early material. Evile have a recognisable style too, now, with ridiculously fast rhythm guitar which has been present since the onset of the band, but I can't help but truly appreciate on this album as something which sets them apart somewhat.

A lot of the solos are also blistering, and I admire them in the nostalgic way that I admired the solos of Megadeth and Metallica when I first got into thrash, which I'm sure is a good sign. The new album has a lot more beauty too, with plenty of pleasant, epic-sounding bridge sections and intros which add a lot to the albums character, and do a lot to season it somewhat, heck, the album even has an 80's thrash style ballad, and whatsmore, it's done rather well. The title "In Memoriam" no doubt a tribute to the bands deceased bass player, Mike Alexander. There's a little more of a groove element than you might encounter in an 80's band, but the band pull it off well, refining what they did on Infected Nations, albeit making it more memorable and sharper, a little more atmospheric, and altogether a lot more listenable.

Five Serpent's teeth is certainly an album which was enjoyable to listen to, and can be summarised as essentially a better  version of their previous two albums. It's certainly a landmark in their career, and while it isn't one of the definitive releases of the year, I enjoyed almost every song.