As one of the fundamental ingredients in the early black-metal scene, Hellhammer are very well known, despite having only released one EP, and a couple of long demos. "Apocalyptic Raids" is the bands first, and only EP, and despite its shortness, is highly enjoyable. 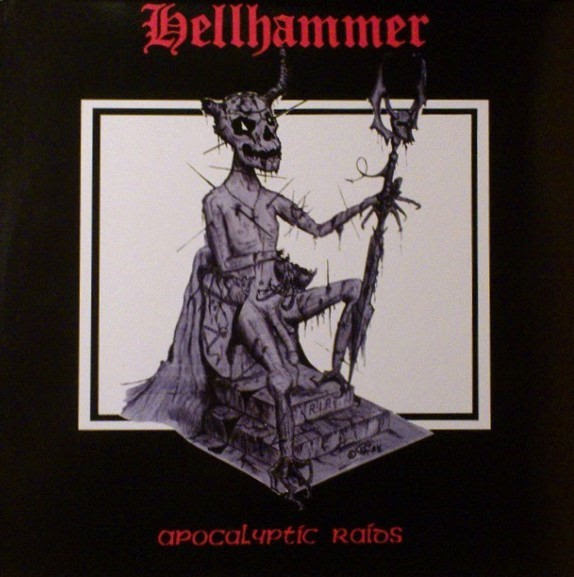 Four songs and twenty-minutes in length, "Apocalyptic Raids" still manages to fit a lot in. Hellhammer deliver a thrashy assault on the senses, in the style of bands like Venom and Motorhead, and, while being closely associated with the first wave of black-metal, the band would almost certainly be considered black-thrash, instead, if they emerged now. The instrumentation is reasonably simple, but also very effective, with memorable, long-sustained power chord riffs, which buzz and rasp through the songs with an extremely enjoyable tone, and a range of vocals, with what would become traditional black-metal screaming, but was about five years before that association was made. In tracks like the "epic" of the EP, the nine-minute "Triumph of Death", the dark and occult atmosphere which bands like Venom, at the time, did not possess to such an extent, setting bands like Hellhammer and Bathory apart as pioneering the terrifying and raw atmosphere of future black metal. From the artwork and production values, too, a strong influence is shown, with the minimalistic, black and red approach to art taken by so many black metal bands today, and the raw recordings often favoured.

The music on the EP, and the majority of Hellhammer's material, if you lend your ear to it, has a very solid sound. In many cases, the fact that the music does not have a huge array of decoration and frill is actually very pleasing, making the songs very memorable, catchy, and allowing the listener to appreciate the simpler elements of the music; The immense guitar driven sound, and pounding rhythmic drums really feel energetic, primal, and altogether METAL. The bass too, is audible, which pleases me greatly. I'm glad that Hellhammer didn't feel the need to be "kvlt" as later bands did, and excessively soak their sound in treble, making the bass sound inaudible. In this EP though, the bass is loud, clear, and damn enjoyable. It adds an extra helping of depth, power and oomph to the music, and keeps its speedy sound, with distinct pauses, as opposed to the later "wall of sound" school of black metal.


All in all, listening to the EP, the sheer influence of the music is apparent. However, the EP is bloody-splendid in it's own right, with it's raucous, dark sound, and angry tone. Anyone who likes an EP filled to the brim with spit and energy would benefit from listening to this, even if you don't like black-metal. And if you listen to Celtic Frost... well... you had better know the name Hellhammer.